Bookshots: 'Cruel is the Night' by Karo Hamalainen 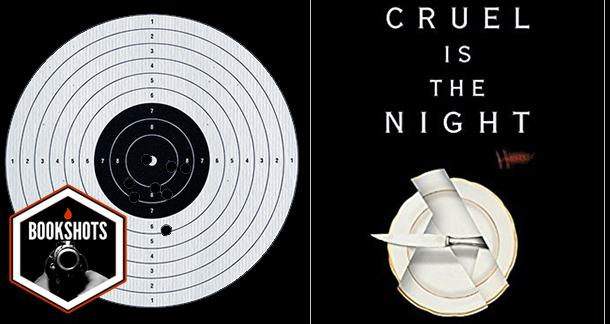 Cruel is the Night

Reading this book is like taking out the trash and having the bottom of the bag rip halfway down the driveway.

Originally written in Finnish by Karo Hamalainen then translated into English by Owen Witesman.

Four friends have dinner together, and by the end of the night all but one of them will be dead.

I think it would be funny if James McAvoy played all four characters in the same spirit as his turn in M. Night’s Split.

London? I would be okay with that.

The following is not a well-written passage, but I feel like I can’t write this review without including it somewhere, so here you go:

As I lathered up, I squeezed my arm muscles and my boobs. I massaged my hips and buttocks. I imagined Mikko’s tentative hands. Soon I had to pee. Bending at the knees, I aimed at the drain. Dark yellow urine pierced the soap bubbles. So I would mark my territory this way.

There are many negative aspects that could potentially be found in a book that I might forgive. Maybe there are a few awkward sentences. Maybe the characters’ actions don’t always make a lot of sense. These flaws won’t always make me stop reading. Sometimes imperfection is okay. Sometimes a rough reading experience can enhance a person’s overall enjoyment. If you disagree, then you’ve never heard of punk rock music.

However, what I cannot forgive is a book that is boring, and Cruel is the Night is exactly that. I embrace nineteen hours of consciousness a day. These days are not infinite. Eventually a black cloud will fall upon me and suck me into its abyss. Until then, I aim to make my time worth while. I want to enjoy being awake. I want to go to sleep each day convinced I have not wasted a single second. While reading Cruel is the Night, I couldn’t help but fear I was wasting my life with every new page.

This is a book about four shitty people having a dinner together. At the end of the night, only one of them will still be alive. The reader is supposed to guess the survivor as they read along, but really, who gives a shit. The real challenge here is even finishing the goddamn thing without falling asleep. Reading this book is like taking out the trash and having the bottom of the bag rip halfway down the driveway.

The book is narrated in first person and every chapter switches POV. Every narration seems to take eighty steps back from where the last one left off. The exposition here reads like the author’s character background outline accidentally got copied into the manuscript and nobody editing it was sober enough to realize it.

Maybe this is simply the case of a bad translation, given the novel was originally written in Finnish by Karo Hamalainen and translated to English by Owen Witesman. I don’t know. I think in this case it would be like comparing the experience of getting bashed in the head by a wooden baseball bat and an aluminum one. Either way, you’re still getting pretty fucked up.