Unprintable: The LitReactor Podcast Episode 19 - Pushing the Boundaries of the Reading Experience 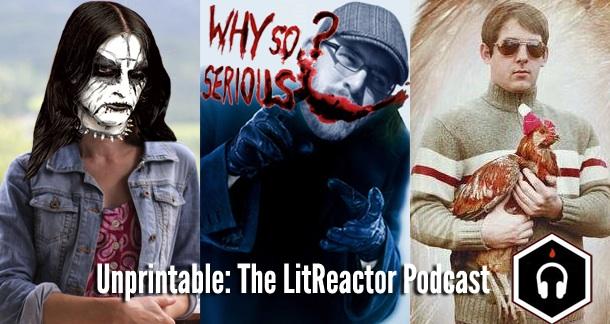 Episode 19 - Pushing the Boundaries of the Reading Experience

News: Bret Easton Ellis is at it again. He's gone and started his very own podcast. And in an attempt to compete with the juggernaut that is Unprintable, he had petulant egomaniac Kanye West as his first guest. In less obnoxious news, there are new rumblings of a Preacher adaptation, this time with the aid of Seth Rogen and AMC.

Reads: Cath and Josh gush over Night Film by Marisha Pessl, while Rob gushes over The Moment Before by Suzy Vitello. And speaking of gushing, we also talk about Flush Boy by Stephen Graham Jones, which happens to be the best urine related novel ever written.

Topic: Are you sick of plain ole' books? Don't you wish they, you know, did more? Ever since Steve Guttenberg invented the printing press, authors and publishers have been trying to break out of the box that is "the novel." Whether by playing with narrative structure or by manipulating physical presentation, artists have been pushing the boundaries of the written word. Now with the advent of digital technology, they have even more tools at their disposal to make the pretentious grunt and purists groan. Taking our cue from the interactive elements of Night Film, we discuss how the reading experience is changing, and whether or not that is a positive thing.

S. should have been included in this...

But I totally dig Night Film...

Joshua Chaplinsky from New York is reading a lot more during the quarantine December 7, 2013 - 7:53am

Crap! S. was on the list of things to talk about, but looks like it go lost in the shuffle (since none of us have read it).

It's OK, Josh. You can't have good podcasts every time out...

Reading good books is always enjoyed by the people especially the books having good quality of content. There are some literature and fiction books mentioned by www.researchwritingkings.com that are considered too much boring to be read by the people.

I love to find reading this book and enjoy the scenario in the natural description.They may buy essay regarding how the interested people could get engaged with finding the appropriate books.

Township is an engaging internet game, Township cheats which offers a special blend of cultivating and town-building components