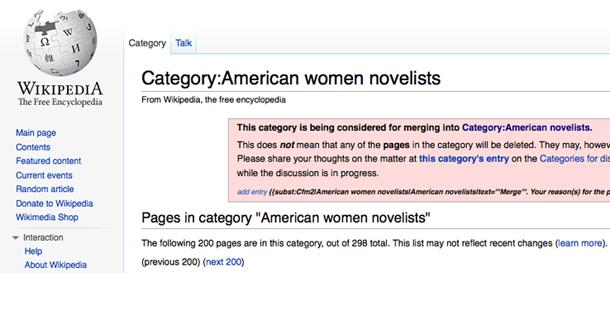 Yesterday, the encyclopedia website Wikipedia came under fire for removing ALL female authors from their 'American Novelists' list page, The Huffington Post reports. The authors were moved to an 'American Women Novelists' list instead, effectively segregating males from females.

Once news of this blatantly sexist move got out, a firestorm brewed on the Internet. Editor Ellen Datlow, authors Elizabeth Hand and LitReactor's own Kat Howard voiced protests on Twitter, amongst others. Publishers Melville House wrote "'American women novelists' is a code phrase for 'to be ignored' right?"

It seems female writers are trickling back onto the page, but to undo this kind of damage, Wikipedia will have to crank that proverbial faucet full blast. The explanation that the page needed some housekeeping isn't good enough. Why not remove every African American writer, for instance? The backlash to a move like that would be equally fervent and justified.

Anyone else care to weight in on this topic?

100% total bullshit. how stupid are they? i just don't even understand.

In discussing gender disparity in literature, I am going to punch the next person in the throat who says,"but writing is judged on the merits of the work, not the sex of the author," because it just isn't.

Dwayne from Cincinnati, Ohio (suburbs) is reading books that rotate to often to keep this updated April 25, 2013 - 12:49pm

I couldn't care less, and it seems good a way to break them up as anything else.

I can't imagine what they were thinking.

I can see getting up in arms about this, it's exclusionary, it's stupid. Though don't they already have a category for American female authors? Personally, I am a fan of sub-categories. Searching for an album in my iTunes usually involves scouring through several dropdown folders as if they were nesting dolls. I do use Wikipedia's categories like searching African American Authors or Jewish-American Authors because sometimes that's what I'm looking for, if there is a slight in there I don't know if it is the categories themselves or my desire to utilize them.

So the exclusionary part of this would be offensive if I allowed myself to be offended by this, but then looking at this list of lists of writers, and all the gender sub-categories are about women  writers and seeing LGBT writers listed under "categories by nationality," the categorization process is already pretty dubious.

If Wikipedia wants sub-categories then they should create sub-categories for everyone, not just for women. The category for male authors should be renamed to "White American Male Novelists" and then they should break the others into "race+American+gender+Novelists". I still don't like it. Then again, after taking an ethnic studies course in college, I hate the categorization of people into specific groups based on traits.

Jane Wiseman from living outside of Albuquerque/in Minneapolis is reading Look to Windward by Iain M. Banks April 26, 2013 - 6:06am

Gerd Duerner from Germany is reading Rebecca of Sunnybrook Farm April 27, 2013 - 5:04am

If not sexist it's at the least a extremely stupid move that doesn't cast a fortunate light on Wikipedia as a source of information - but then again, did it ever have much credibility in that field to begin with?

If more manageability or clarity was the goal it just doesn't make sense to split authors by male/female - unless one wanted to make a statement that men and women write intrinsically different (but then one couldn't only take their genetic identity into count)?
If the list needs to be weeded out, why not split it by centuries and or decades?

Dwayne from Cincinnati, Ohio (suburbs) is reading books that rotate to often to keep this updated April 27, 2013 - 7:02am

I still don't care. It seems it would just be that men and women tend to have different names, and people can tell gender by name. And they did split them by century. I mean is this the a real problem?