Wii U Could Feature eBook Store 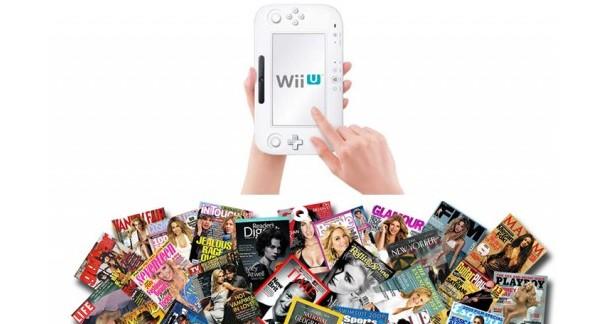 Do you guys remember when Nintendo unveiled the Wii U at the E3 expo?  Were you thinking the same thing I was?

"Holy hell, can that controller be any bigger?"

Obviously, Nintendo has their reasons for making the oversized handheld.  Here's a video to get you up to speed:

Some of this looks pretty sweet, especially the capability to play on the controller itself.  Those who've argued over control of the TV with their significant other will probably agree.  Now it turns out that Nintendo may be looking to get into the app game to take advantage of the controller's tablet-like qualities.  Yes, perhaps Angry Birds and Tiny Wings are in the Wii U's future, and if sources are accurate: an eReader service for digital books.

The source (from Forget the Box) is claiming that Nintendo may implement an eReader store with their new product that would feature books, magazines, newspapers, comics, and even game guides.  The 3DS would use this software too.  Essentially, Nintendo is cooking up their own version of the iPad in hopes of attracting a wider audience.  Yeah, yeah, we know, the Wii U is never going to be able to compete with the iPad, but it sure as hell could give Kindle Fire a run for its money.

This all sounds very cool, though: a gaming system that doubles as a tablet and eReader.  I've yet to defect to eReading, but if my gaming system had the capability, I'd probably take advantage of it.

What do you think, LitReactors: anyone planning on picking up the Wii U this year?

Joshua Chaplinsky from New York is reading a lot more during the quarantine January 4, 2012 - 11:02am

Alright, this has gone too far. In my day, things were things. They weren't trying to be everything like they are now. My Nintendo wasn't a toaster. It didn't open my mail or wipe my ass. I'm old and this technology scares me.

Josh, seriously, you're okay with the chicken head, but technology is scary?

All teasing aside, I think these devices are brilliant and need to become the norm. I am currently tackling one of my stupid resolutions to de-clutter my house, and enemy one is all the damn paper! I look forward to the day when I can remove the mailbox from my home - no more flyers, catalogues, news papers, phone books, or paper bills. In addition to that, I wish my kid's teachers would fully embraces e-mail so they would stop sending a paper version of the school newsletter for which I already receive a digital version. I feel like I am being smothered by all this useless paper.

I think the Wii U could be a neat addition to any home, but just one suggestion: Don't let it be the only e-reader in your home if you have a family. It could easily become the source of many arguments, ie - Sally wants to play Mario, but daddy's in the middle of a great read.

SGJ from Midland, Texas (but in Boulder, Colorado, now) is reading weird fiction and horror fiction and science fiction and literary fiction and innovative fiction, or maybe a romance or a western or a magazine on bowhunting or show trucks or anthropology January 4, 2012 - 11:57pm