Want To Explore The Boston Of 'Infinite Jest'? Also, Bret Easton Ellis Not A Fan Of David Foster Wallace 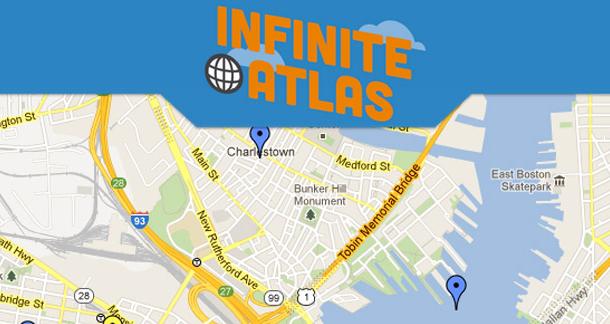 Fans of Infinite Jest, take note--writer and blogger William Beutler has created Infinite Atlas, an interactive guide to the Boston of Wallace's novel, created with Google Maps, and complete with annotations.

Here's the note from Bread and Circus Quality Provisions, which first appears on page 478 of the book:

And for the Wallace super-fans, Beutler has created Infinite Map, a limited-edition print which covers Wallace's fictionalized version of the U.S. Infinite Jest fans, check it out, and let us know what you think.

Meanwhile, Bret Easton Ellis was reading D.T. Max’s biography of David Foster Wallace, Every Love Story is a Ghost Story, and launched a Twitter tirade against Wallace. You can see more tweets over at Salon, but here's a taste:

As you would imagine, Ellis is taking a beating on Twitter over his comments. Personally, I think he's entitled to his opinion and I like that he stirs the pot. But I'm a fan of his work; I know a lot of people aren't, and judge him far more harshly.

I've been threatened by many a Lit Nerd before for saying this, but I totally share Bret's opinion of DFW.

WesFord from America (CO, NE, NC, AK, NY, WA) is reading We Have Always Lived in the Castle by Shirley Jackson, Portable Atheist by Hitchens, 20th Century Ghosts by Joe Hill September 6, 2012 - 10:59am

I've only read Broom of the System, but I loved every page of it. "Loved every page" as in I couldn't get enough and feel like I'm slogging through some other books on my shelf to make room for the next DFW book I get my hands on.

BEE is of course entitled to his opinion, but reading the rest of the article it makes me wonder if he's just lashing out at DFW for bashing American Psycho years ago (or if DFW bashes him further in the bio) and BEE's entire character history. I suppose one would have to read the bio to try and figure out why BEE is on the attack now.

Were there any saving graces in the tweets? If BEE had given a review like that on this site he would receive an "unhelpful review" and not get any workshop points.

I haven't read Infinite Jest yet (sitting on my bookshelf though) and I really liked American Psycho, but the guy already killed himself, is bashing still necessary?

I'd have to say that, based on what little I've read from Wallace, Ellis has a point.

the guy already killed himself, is bashing still necessary?

Since he killed himself, I doubt Wallace cares much what Ellis has to say.
Besides, Hitler killed himself; does this mean we shouldn't criticize him?

Just a note to anyone who thinks I'm comparing Wallace to Hitler: I'm not. Seriously. What I'm doing is using an extreme example to illustrate how illogical the notion that a person's suicide negates the need to "bash" that person really is. On a separate note, I believe that suicide virtually always necessitates criticism, and I will proudly bash any non-samurai whose perception is twisted enough to view suicide as anything other than selfish cowardice. But that's the end of that tirade.

Class Director
Rob from New York City is reading at a fast enough pace it would be cumbersome to update this September 7, 2012 - 8:06am

Bret--thanks for bringing up that point, because it's an important one. Someone being dead shouldn't make them immune to criticism. To take issue with Ellis' tone is one thing, but to say that we shouldn't be critical of Wallace's work because he killed himself is ridiculous.