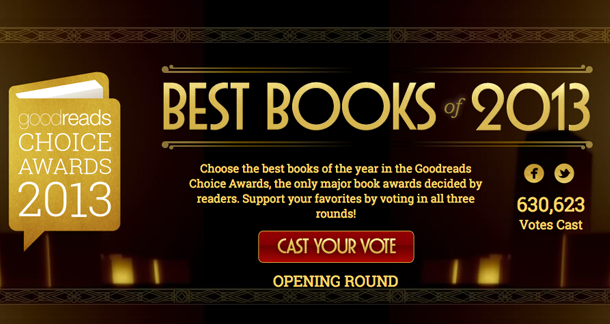 Voting for the Goodreads Choice Awards 2013 has begun, so now’s your chance to get the book you loved most in the last year to win an award. Well, that’s what it seems like the premise is, anyway. There are 20 different categories to vote in and some big names in there (J.K. Rowling, Stephen King and Dan Brown in Mystery & Thriller) and some not-so-big names (I haven’t heard of most of the nominees for ‘Best Fiction’, as I obviously don’t pay attention to that sort of thing). There will be three rounds of voting to whittle the list down to the winners in the coming month.

The Goodreads Choice Awards are the only major book awards decided by readers, and we find our nominees from books that our members read and love throughout the year. There’s no judging panel or industry experts. We analyzed statistics from the 250 million books added, rated, and reviewed on the site in 2013 to nominate 15 books in each category. Of course, with hundreds of thousands of books published in 2013, no nominee list could cover the amazing breadth of books reviewed on Goodreads so we also accept write-in votes during the Opening Round to ensure that you can vote for exactly the book you want.

The first round starts this week, closing on the 9th, then the next lot from the 11th to the 16th, leading up to the final round of voting from the 18th to the 25th. But not all nominees are chuffed with the nomination. Science fiction author John Scalzi makes a good point about the whole process on his blog, in a post entitled Vote For Someone Else for the First Round of the Goodreads Choice Awards 2013:

Also, to be blunt, the Goodreads Choice Awards has three rounds of voting in the space of a month, and wants all of us nominees to spend a lot of time and energy exhorting everyone we know to vote at each round of the contest. That’s a lot of pestering over not a lot of time. I don’t mind reminding people about nominating and voting for Nebulas and Hugos, which are spread out so the advertisements for one’s self are not overwhelming. A month-long constant drumbeat of vote pleading, on the other hand, doesn’t seem like a whole lot of fun to me right now.

A good point. I have to admit it does seem like a lot of voting and as he so accurately describes it, “pestering”, although maybe not so much if you're not a nominee. Are you planning to take part? Will you be exhorting all your friends, family and acquaintances to vote for your favorite author? I don’t know if I will. Maybe I’ll just have another cup of coffee…

You can go place your votes here.