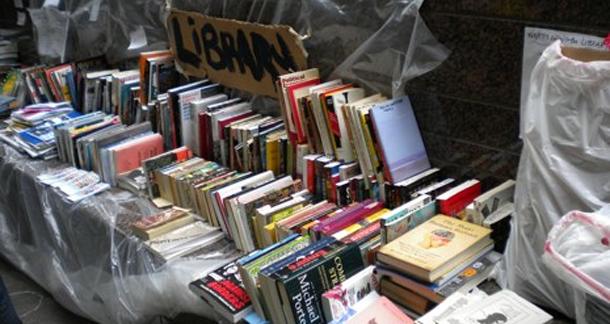 Some of the Occupy folks visited the Sanitation garage this morning to pick up items confiscated in the raid, and it turns out the contents of the library weren't handled with much care. Books are missing or destroyed; laptops are broken; and supplies, structures, and personal items have vanished. The Occupy Wall Street Library Blog is providing the depressing updates.

Early this morning the NYPD cleared out Occupy Wall Street's home base at Zuccotti Park, citing health and safety concerns. Rather than give the protestors some advance notice, they stormed in wearing riot gear at 1 a.m. Naturally, the protestors didn't go quietly.

The raid brought with it reports of police brutality and press censorship, as well as the disappointing news that more than 5,000 books from the Occupy Wall Street Library were confiscated.

The NYPD, working in conjunction with the Sanitation Department, hauled away tents, tarps, and sleeping bags, as well as the library. The city-issued eviction notice indicates that all the confiscated materials would be available at a Sanitation garage on W 57th Street, although no one really believed it; bloggers and Occupiers have spent the day lamenting the destruction of the books.

But, hope springs eternal. Mayor Bloomberg just tweeted that the books are safe, and even provided photographic evidence.

That's a relief. This post was initially a polemic against censorship. I know this isn't Fahrenheit 451-style shenanigans, and I know the Occupy movement is divisive, but I'm sure we can all agree that the confiscation of books is troubling, especially in a democratic society. It's nice to hear that they're safe. While the photo only shows off a small portion of the library, here's hoping the rest of the books are there, and not damaged or destroyed from being unceremoniously tossed into dump trucks.

This isn't over. There's already talk of rebuilding the library, as well as the propagation of digital libraries. And this morning a judge issued a restraining order against the city, ordering that the protestors be allowed to return to Zuccotti (although the police haven't allowed it). The legal arguments are currently being heard, and a decision should be rendered shortly.

The People will read again!

Anyway, I'm not going to turn this into a political debate, but I do want to say this: For the past two months I've walked by the park nearly every day and watched the Occupy Wall Street shanty town get a little more crowded and complex. This morning the park was scrubbed clean and surrounded by fences and cops in riot gear. Dozens of emergency vehicles clogged the streets and I got some scary looks from the police when I stopped to take a photo with my phone.

I much preferred the indignation of the protestors, compared to the military zone I walked through this morning.

I dare say any of the books available there could easily be found at any number of libraries, bookstores, and rummage sales. I'd save my panty bunching for something more important than a pile of dog-eared paperbacks.

"The Sanitation Department" must specialize in cleaning the streets of literate people and George Orwell novels.

I didn't know Nixon was back in office.

I hope those there were not using the pages as toilet paper!

cristina from Tucson, Arizona is reading The Peripheral by William Gibson November 16, 2011 - 9:25am

man, it does start sounding like the beginning of a dystopian novel. hope it doesn't go further down that path! but i AM glad the books are safe. in the digital age maybe the idea of paperbacks seems quaint - but they can be really important to the owners. like old instruments, they can hold a bit of your mojo...

You pays your money and you takes your chances. They did not remove their property, though they were warned to. Anything left in the park was taken to the Sanitation Department. I love books, I have many, many books; I love to talk about them, recommend them, get recommendations; but, they are just things at the end of the day. If you do not take care of your things, if you do not remove them from an area when warned to, then this is what can happen.

I've have the feeling that the library and the books are merely a prop. It doesn't take a genius to realize that eventually the park, which is private property, was going to get cleared. So why not gather donated books (almost by definition books that people don't value whether because of content or they have better copies) into a "library" and then when the "big bad police-state thugs" come and take it away you can cry "censorship" and "police state" and garner sympathy from all the book lovers of the world as long as they don't think too hard about the fact that any of the books confiscated or destroyed should have been better protected or can be found at any number of venues, including the "police-state" libraries where they are well treated and protected. Those who find the OWS view of their library to be valid either haven't thought it through or see books not as tools of different quality and capabilities, but as fetishes that hold some sort of secret power.

It sounds like a starting of a nove. I love to use it my essay writing to support my arguments.