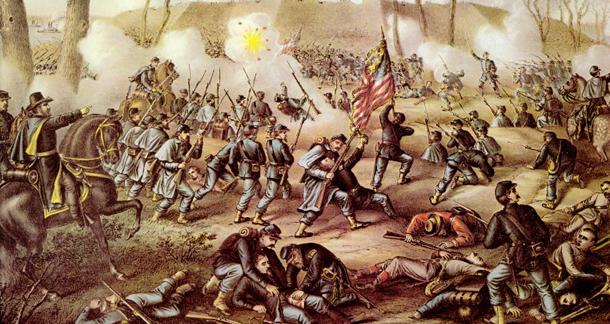 The time has come for all good LitReactors to show us what they’ve fucking got.

In the true spirit of competition and writing, a couple good and wonderful people within the LitReactor community -- Josh AKA Utah and myself -- have thrown down the gauntlet and thrown up a tournament.  Everyone can say they’re the best writer on the site, but wouldn’t it be great to actually have some bragging rights you can take to the water cooler?

So begins WAR, a 64-contestant tournament-style competition to crown a site champion.  In a series of writer battles, all organized into a neat little double elimination bracket, writers will go toe to toe against other writers.  They will enter onto the field of battle with only a prompt, 2,500 words, and a week to write.  The stories will be thrown into anonymous polls for the masses to read, enjoy, and vote for their favorite.  The winners advance until finally, after a grueling 7 weeks, a winner will be crowned and all of LitReactor will speak their name.

WAR challenges contestants to not only write, but to write quickly and creatively.  Prompts are assigned randomly and cover all possible realms and genres.  In only one week  a contestant must write a badass short story, rest up for a week while the votes come in, and then, with luck and skill, do it all over again the next week with a new opponent and a new prompt.

The WAR polls will be locked to all non-workshop members in order to help keep the stories secure, but the brackets will be visible and a new thread full of smack-talking writers will be in the forums each round.  The roster is nearly full, with about five slots remaining as of the time this was filed, and the competition looks fierce!  With writers such as Richard Thomas, Gordon Highland, Nik Korpon, and so many others vying for the title it will be interesting to see who will prevail and possibly which unknown writer will swoop in and knock out one of the big dogs.  The tournament promises to be a difficult and bloody affair.

To give time to get the word out and get as many people involved as possible, the first writing prompts will drop and the competition will begin on November 2, 2012.  Come take a peek at the action over in the Community, there's plenty of healthy competition and heavy metal for all to enjoy.

Dear Everybody In the Universe:

I'm going to offer up an editorial correction to this article.  WAR2 will actually run longer than 7 weeks.  It is a 7 round tournament, with each round taking 2 weeks.  Then, because of size, we're going to have to do some staggered stuff with the first couple rounds, so those will take a bit longer.

No joke, man.  She put you right up there in everybody's face.

You can handle it!  I'm just making it a sweeter victory for someone...

Yes, knocking Richard off would be resumé-worthy, even if you don't win it all. Which, let's face it, you won't, if Nik has anything to say about it. Which he won't, because you're gonna show his ass how it's done. Right?

We haven't even begun and I'm already writing in circles…

I am so excited! Let the games begin!!

it should be interesting to see how the brackets shake out since it's random. i mean, heck, i could face nik in the first round and be gone just like THAT. it's a tough battle. i never won any of the battles i DID win by a huge margin, maybe 60/40 at best. which is still very close. and i lost my battle by ONE VOTE. so, bring your "A-Game," as anybody can go down in any round. there is a TON of talent here.

I'm terrified of this "Nik" you all speak so reverently of.

Devon Robbins from Utah is reading The Least Of My Scars by Stephen Graham Jones October 13, 2012 - 9:41am

You should be. When you wake up in a van and a bag is pulled off your head, and your surrounded by shady characters, Nik is the guy putting the gun in your mouth.

Jane Wiseman from Danville Virginia--now living outside of Albuquerque/in Minneapolis is reading Kindred, by Octavia Butler October 13, 2012 - 9:32am

Emma, in your current incarnation, you too are a Nik--La Emme NIK ita Mabye you're the one we should all fear!

Nik is the guy putting the gun in your mouth.

A gun if you're lucky.

Devon Robbins from Utah is reading The Least Of My Scars by Stephen Graham Jones October 13, 2012 - 10:59am

Right. Just keep telling yourself it's only dead black Glock .40 with one in the chamber and full clip.

Love to get involved in this warfare - if only I weren't so heavily entrenched in #3. Have fun, mates! I expect to read some lovely literary fisticuffs! ;)

Moderator
Utah from Fort Worth, TX is reading Lonesome Dove by Larry McMurtry October 14, 2012 - 9:13am

All this talk about Nik Korpon and none about Bryan Howie?  Remiss, that's what that is.  I have a sneaking suspicion Mr. Howie is at that precious "tipping point" where his work will soon begin to pay relatively well.

I, for one, plan to "randomly" make certain Bryan Howie is in a different grouping at the beginning of the tournament.

Moderator
Utah from Fort Worth, TX is reading Lonesome Dove by Larry McMurtry October 14, 2012 - 9:14am

@Andrez:  much love, brother.  Thanks for thinking of us, and poke your face in every once in ahwile.

can one still apply for the tournament?

Moderator
Utah from Fort Worth, TX is reading Lonesome Dove by Larry McMurtry October 15, 2012 - 11:03am

At this point the Battle Roster is full, but I'll be happy to put you down as an alternate if you'd like.

If you're happy then I'm happy too. Feel free to put me down.