Uncovered Tolkien Drawings Mark The 75th Anniversary Of "The Hobbit" 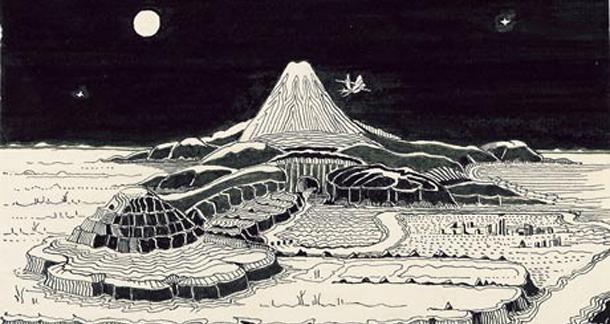 The published version of The Hobbit included about 20 illustrations from JRR Tolkien. But as it turns out, those were only the drawings that made the cut.

HarperCollins is prepping for the 75th anniversary of The Hobbit (and the accompanying film from Peter Jackson), and they said, "Hey, let's go check out Tolkien's archives at the Bodleian Library in Oxford to see if it's got any cool stuff." Then they found more than 100 additional drawings and presumably popped some champagne to celebrate.

The illustrations range from simple line drawings to watercolors. The collection will be published in the UK on Thursday (that was quick!) as The Art of the Hobbit. It is unclear whether that is the US release date as well.

This would be a significant find at any point, but I think it'll be especially interesting now, to compare these drawings--which I imagine expand on the visual language of Tolkien's world--to the visual style established by Peter Jackson.

I already have the annotated version of The Hobbit, but I am sure I will get this new edition, as well, for the new illustrations. I'm a sucker like that.

I love The Hobbit. Such a fantastic story. I still need to read The Lord of the Rings. Shame on me for not having read the trilogy yet.

Kasey from the morally and physically challenging plains of Texas is reading 12pt. Courier font October 26, 2011 - 7:21am

These books were the first books my father encouraged me to read.  These drawings will be interesting to say the least, especially to see how they "sync up" with the films.