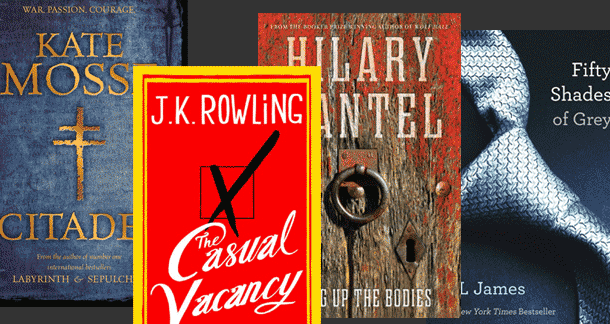 It was probably only a matter of time before E. L. James, author of controversial mommy-porn novel Fifty Shades of Grey, was nominated for some kind of award. Don’t worry, it’s not in a literary category - it’s unlikely to win any awards for its prose. It’s been put forward for the Popular Fiction Book of the Year.

Chosen by a panel of 50 book experts, including booksellers and journalists, the prize is intended to reward an adult novel "which has made a massive impact [and] that may have exceeded expectations".

It’s up against Kate Mosse’s latest, Citadel,  Bernard Cornwell’s 1356, JoJo Moyes’s Me Before You, Victoria Hislop’s The Thread, and Dorothy Koomson’s The Rose Petal Beach.  Previous winners in the category include David Nicholls, Sebastian Faulks and Marian Keyes. The general public votes on all the nominees, with the intention of the vote reflecting books people are actually reading. And as it’s in the run up to Christmas, it’s likely to boost sales of the winners’ and nominees’ books.

After the winners are announced on the 4th of December there will be another public vote, as each category is put forward for the National Book of the Year. The result of that vote will be revealed on the 18th of December.

Like a lot of public votes, the fans will probably rally around their favorites, so who knows, E. L. James may well win it - but the question (for me, at least) is ‘should she win’?

You can read the full shortlist here.

That's the reason right there.  That 50 Shades probably kept a lot of stores going.  Massive sales.

I hope The Psychopath Test, by Jon Ronson wins its catagory.  I liked that book a lot.

As far as popularity goes, it should probably win. That being said, I hate this book like no other. A friend is making me read it, and it's pure pain. Even looking past the god-awful prose that can't have seen much revision, the characters are not at all likeable. My only hope is that I'll get to see them really suffer for making me suffer through their whining and chapter after chapter of boring, cliched sex. Seriously, why do people enjoy reading about nothing more than two Mary Sues going at it? Where is the interest?

I don't really get how this category will be judged. What's the point of handing out an award based on popularity/impact on the market? Isn't the popularity its own reward, divorced from literary merit? And if the books are to be judged on literary merit, why even have this category? Is it really the "Oh, this was surprisingly palatable for something that appeals to the masses!" category?

Dwayne from Cincinnati, Ohio (suburbs) is reading books that rotate to often to keep this updated November 14, 2012 - 10:48pm

@Imsteph - To be fair there are tons of books that book reviewers love that are horrible, just like popular books.