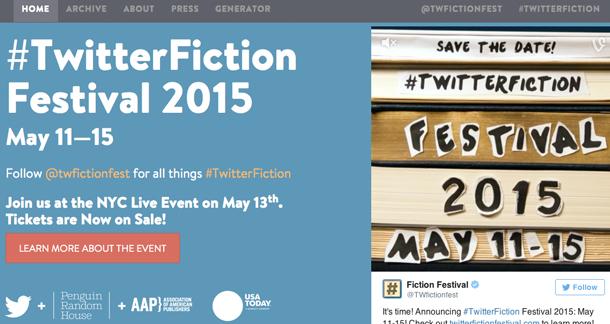 The 2015 #TwitterFiction Festival—an event aimed at “embracing, exploring, and developing the art of storytelling on Twitter”—begins next week on Monday, May 11 at 9 a.m, reports GalleyCat.

Author Celeste Ng will start the feed off with a love story contained in a note she discovered in the Cambridge Public Library. Over the five days in which the event takes place, 24 festival contest winners—collectively representing seven countries and sixteen states—will be featured. Also participating are well known authors like Margaret Atwood, Jackie Collins, and Lemony Snicket.

Those who tune in should expect to read a large sampling of genres, from a thriller centered on a CIA agent searching for a terrorist to Star Wars-themed love poetry. While #TwitterFiction festival focuses on the social media network, there will also be a physical event held in New York City on May 13. The gathering will involve writers live tweeting stories in front of a live audience.

Will you be tuning into this year’s festival?