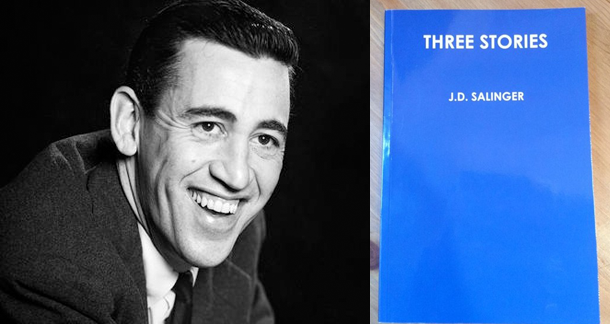 The enigma that was J.D. Salinger, author of Catcher in the Rye and noted recluse has had some light shed on his story after release of a biopic. Shortly after the release, it was announced that five stories that had previously been unpublished would be released between 2015 and 2020. That was before three of them were “leaked” via a sale on eBay last week and the story broke on Buzzfeed.


The stories originally appeared online in an eBay auction - PDF scans of the originals, packaged as an illegally published collection titled Three Stories. The auction was then noticed and disseminated by Reddit user throwaway___3849. The three stories include "Paula," "Birthday Boy," and "The Ocean Full of Bowling Balls." The latter is a precursor to Salinger's most lauded book, The Catcher in the Rye, and centers around the death of Holden Caulfield's brother, named Kenneth in the story, and Allie in the finished novel. It was originally slated to appear in Harper's Bazaar, but Salinger chose not to publish it. It is housed at the Princeton library, where a limited number of scholars were allowed access to it.

It’s unclear whether these are three of the five, but they have been verified as authentic by two separate Salinger experts. One of whom, author of Salinger: A Life, Kenneth Slawenski, told BuzzFeed, “While I do quibble with the ethics (or lack of ethics) in posting the Salinger stories, they look to be true transcripts of the originals and match my own copies." It also appears that the three stories, while in a different, more laid-out form than the original typed manuscripts, are copies of stories available for study by scholars already.

I agree with Buzzfeed that there is a moral dilemma here: to read things the author didn’t want published or to read them anyway — I suppose that authors have to realize there’s little they can do about controlling their work after they’re dead. Well, unless you’re Tolkein, of course. Would you read these stories? I have to admit my curiosity is piqued…

I have a PDF of them and I've read The Ocean Full Of Bowling Balls. I plan to read the others but I haven't had the free time. One hopes that the writing they aren't proud of doesn't make it out into the world, but if it does after death, I can't see the harm (I guess I'm not on board with the idea that Salinger is looking down on us, upset we're reading his unpublished work). If they are a part of the five intended to be published, I'll buy them in hard copy to have on the shelf, if they were never intended to be sold at all... again... what's the harm? Author "estates" have always left me feeling ambivalent, anyway.

For what it's worth, I thought The Ocean Full Of Bowling Balls was amazing.