There's So Much Damned Profanity In YA Books 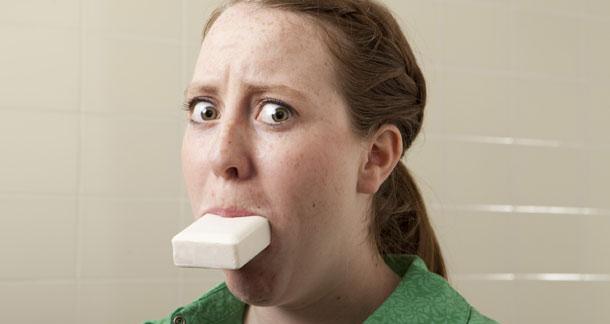 A paper published today says that richer, prettier, more popular characters in YA novels swear more often than their dorky nerdface counterparts, and that "this is really important because adolescents are more likely to imitate media characters portrayed in positive, desirable ways." Professor Obvious—I mean Professor Sarah Coyne—of BrighamYoung University's Family Life Department analyzed 40 best-selling YA novels and was shocked to find an average of 38 naughty words per book.

Half the literary profanity was considered "mild," and given that her university, the largest religious college in the U.S., has a code that prohibits things like coffee, tea, and beards, I cannot imagine what qualifies as "mild profanity" in their minds.

Only five of the analyzed novels were swear-word-free. One went for broke and crammed 500 offenses, including 139 instances of the "F-word," into its 336 pages. That shining example of inappropriateness is Nic Sheff's Tweak: Growing Up On Methamphetamines. It is a book about meth heads. METH HEADS. If your kid is reading this, you should not be shocked to find it's not exactly Teletubbies.

"I had no clue there would be that type of content in those books," says Coyne. "If they were made into movies, they would easily be rated R, and parents have no clue." They should put adult-content warning stickers on YA books, so that teens could quickly identify the good ones.

What do we think? Are kids mature enough to handle this, or should their reading material be sanitized?

I think if you put a sticker on YA books warning about adult content, the teens might disagree on which books were the "good ones." That guarantees they're going to check them out. My oldest is 13 and I don't get riled up over language. Young adults are using some pretty interesting profanities already and I doubt they got these words from books alone. They're words. Nothing more. I think adults need to give young adults a bit more credit.

Daniel Donche from Seattle is reading Transubstantiate, by Richard Thomas May 18, 2012 - 12:20pm

They're more popular because they're more believable. The shit that's in YA is still like PG compared to the stuff teens do and say, so no. There isn't too much adult stuff in my opinion. But then again, I started reading Stephen King when I was in elementary school.

Tim from Philadelphia is reading approximately eight different books. Most unsuccessfully. May 18, 2012 - 12:42pm

Depends on how good the writing is and how true the language is to the characters. If everyone is talking that way regardless of character then it's just poor writing. If it is true to the character people barely notice it. Case in point. Everyone remembers when Mrs. Weasly uses the word "bitch" because it seemed out of character (though it is arguable if it fits the scene) but who remembers the number of times Ron drops the f-bomb (though admittedly in modified form i.e. 'efin') in the last book? Nobody, I'll bet, as he's 'bloody helling' this and 'bloody helling' that throughout the books. It fits his character.

Anyway, swearing is fine as long as it serves the story. If it doesn't then it is poor storytelling. The only question then is if there is that much swearing serving the story is it an appropriate story for young adults. And that really is a decision that needs to be made by the young adult's parents, not academic institutions, or the state.

The only reason to put warning labels on products of any media is no to prevent children from being exposed but rather to prevent their parents from having to expose themselves to the things that have drawn their children's interest. If these parents would care more about understanding their child's world and less about "profanity," both generations would find themselves richer, and artists wouldn't be self-censoring their work just to avoid a warning label.

Typewriter Demigod from London is reading "White Noise" by DeLilo, "Moby-Dick" by Hermann Mellivile and "Uylsses" by Joyce May 18, 2012 - 3:35pm

But....I wrote YA stories. They have "fuck" in them around 100 times too.Also, cecorship is a terrible idea. A warning will only make them want to read it more. And cencorship kills free speech, and that is awful.

Saying that a YA books is better because it has more swearing is a bit off to me. John Green's The Fault in Our Stars has swearing, but it's certainly not on the same level as Sarah Dessen's Just Listen, which has the f-word seemingly every other page. TFiOS is not only wildly popular, but also a genuinely good book. Just Listen, on the other hand, is popular amongst Dessen/teen romance fans, but it's not topping any charts across the board.

The idea of sanitizing books for any reason is a bad idea, but so is saying that just because a book falls into a certain category or is aimed at a certain audience, it should be allowed to do whatever it wants because that audience is already doing that certain thing. Swearing isn't going to ruin teens' lives, but it's shoveling it into books isn't going to necessarily improve them, either. It feels like people are getting caught up with the idea that 'this is for teens, they're big kids and they can take it' (especially with profanity), that they forget that sometimes it's not necessary to tell the story they're trying to make.