The U.S. Justice Department Is Readying A Lawsuit Over eBook Pricing 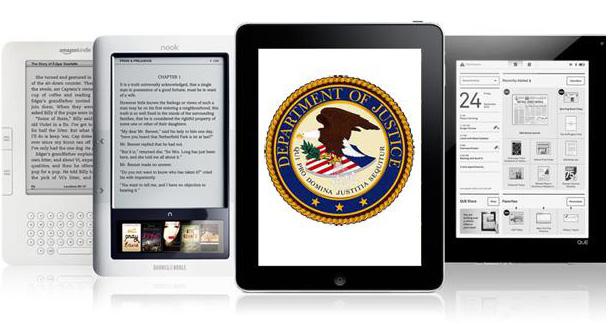 via The Wall Street Journal:

In December we wrote about how the U.S. Justice Department was investigating the method under which eBooks are priced, believing the process to be anti-consumer and anti-competitive.

Today we have word from The Wall Street Journal that the Justice Department is now planning to sue Apple and five other publishers, and there's even talk of a settlement.

When the iPad was released in 2010, Steve Jobs' biggest competitor was Amazon. The iPad would be less competitive if eBooks were less expensive in the Kindle store. So Jobs got five of the Big Six publishing houses--HarperCollins, Hachette, Macmillan, Penguin, and Simon & Schuster--to abandon the "wholesale model" of pricing in favor of the "agency model."

Under the wholesale model, the retailer determines the price of a product. Under the agency model, the publishing house determines the price. And the publishers were eager to jump on board, as they were all blinded by dollar signs. (Random House, the only major publishing house not named here, signed onto the agency model afterwards, which means they weren't party to the original agreement.)

When I first wrote about this issue is December, I postulated three scenarios.

I still believe we're headed for the second scenario. The agreement to stagger pricing in the iTunes store sets a precedent, and it allows the book companies to maintain some degree of control, while giving the illusion that there's some more parity within the pricing system. It's not the best scenario (prices still aren't being set by the consumer), but at least we'll be moving away from the ridiculous "everything must cost exactly the same" model.

I have a couple questions.

2. How will us moving to a retail model benefit the writers? I understand that more people will be able to afford it therefore making it available to a wider audience, but is that the best case scenario?

We all want people to read our work and enjoy it, but we still need to eat, pay our bills, and support our families....for those that have them.

Class Director
Rob from New York City is reading at a fast enough pace it would be cumbersome to update this March 8, 2012 - 9:18am

1. The benefit to the writers is a different conversation--that's another pricing model that doesn't really favor the writer, as the royalty cut is very small. Lowering the price of eBooks would, at first blush, seem like the publisher and the author would both get less money. But I believe (along with many others) that more people would buy eBooks if they were more fairly priced. I work for a digital publishing house that specializes in backlist books, and we hear constantly from people who believe $9.99 is too expensive for backlist. What's a fair price? Who knows. That's another other conversation.

I kinda answered your second question there, too! It benefits the writers because better pricing will sell more books and lead to quicker adoption.

When I said the publishers were blinded by dollar signs, I meant it: The assumption is that if you charge more, you'll make more money. We've learned that if you charge more, people just won't buy it. We're turning consumers into bargain hunters who buy .99 eBooks regardless of quality, because those are the cheapest. That's why self-published authors have done so well--traditionally-published books are too expensive in comparison.

I'm all for writers earning money, and I'm against devaluing books. I don't believe all books should be priced at .99 cents across the board. But there has to be room for flexible pricing. Doing that is going to attract more people to adopt eReader technology and buy more books.

What we need is experimentation, to see what works. You can't experiment all that much under the agency model.

I work in a field where digital, virtual goods are sold -- social and mobile games. And too many times have I worked for companies that didn't understand: the cheaper this digital item is, the more it will sell. Instead, they would up the price of any virtual good that was selling well, which would in turn drop the sales considerably. I've voiced my opinion over this issue countless times, but the people in charge of selling the product don't listen. Bigger prices don't ever mean bigger profits.

And I'm the one who would CREATE these digital items. On any given item, it would cost the company somewhere between $50 and $200 for me to make it (based on an hourly wage.) But once it has been made, there is an infinite number of copies of that item that can be sold... because it is DIGITAL. There is no cost to reproduce said item. So, in theory, charging a tiny price would equal plenty more sales, because the consumer in question would think to herself, "Well, it's only 25 cents... why not?"

In eBooks, I'M the consumer. And I can't tell you how many times I've seen a book for less than $3 and thought, "I don't really need to download a sample... it's only $3!" And just BOUGHT it. The pricing of ebooks is the only reason I've ever considered self publishing my work, because I honestly believe I would sell more books and make more of a profit because of the $3 model. In fact, if I do nab a publishing contract in my future, I'm going to try and negotiate the price of my digital books. Not that I believe I'll be able to do it, but... it's something I would like to try.

What really irks me is when I see an ebook costing more than the paperback... THAT makes NO sense to me.

Class Director
Rob from New York City is reading at a fast enough pace it would be cumbersome to update this March 8, 2012 - 1:31pm

@misskokamon - You raise some good points. Some of the books I've published are available as vintage paperbacks, for a few bucks. So people balk at the $9.99 price tag for the eBook. Because here's the thing about an eBook--you own it, but you don't. You own data in a cloud or locked in a device. A physical book comes with a more concrete sense of ownership.

Though, if you want to set your own price, your only option will be to self-publish. I don't think it's possible to negotiate a contract where you get pricing rights.

Courtney from the Midwest is reading Monkey: A Journey to the West and a thousand college textbooks March 8, 2012 - 1:43pm

What exactly is the staggered model? I haven't used iTunes for a while, so I'm not familiar. As far as I can remember, isn't it something like 99 cents for a song, $8.99 if you buy an album of ten songs?

As far as competitive pricing goes -- how long did they think they'd be able to keep this up? I have a Nook-style app on my (now defunct) smartphone and only bought the expensive books (Dave Eggers, Palahniuk) with gift cards and on pay day. When I finished those, I'd troll the cheap novels and free classics.

Class Director
Rob from New York City is reading at a fast enough pace it would be cumbersome to update this March 8, 2012 - 1:57pm

Off the top of my head, I think it's 1.29 for new/hot songs, 99 cents for a lot of other songs, 69 cents for old songs. Something like that. Again, it's a way to give the illusion of parity, while maintaining an agency-type model.

great article though, very interesting times we live in.

Dwayne from Cincinnati, Ohio (suburbs) is reading books that rotate to often to keep this updated March 9, 2012 - 12:30am

How do you think this will affect self publishing? If the price drops on eBooks from traditional publishers (which seems almost inevitable with this pressure and economy, regardless of outcome of the lawsuit) will that A) lower sales as 0.99 isn't as big a savings as it used to be or B) up sales because more people will move over to a wider selection of (on average) lower priced books? Maybe A in the short term, B in the long term? Or cancel out or maybe something else entirely?

Also, isn't this big business vs. big business? Amazon Vs Apple/5 of the big 6? I know they aren't the ones who brought the law suit, but in terms of business interests.