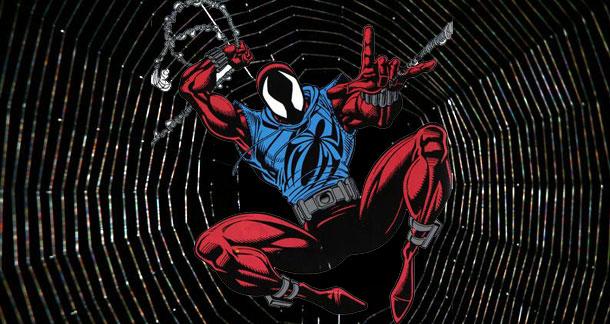 For casual comic book fans, this is going to be a bit of a history lesson.  It was years ago--the mid-90's, actually, when the clone saga got completely out of hand.  There were multiple versions of Peter Parker running around: the original, a good clone, a bad clone, a bunch of clones that didn't take, etc.  The idea was simple: what if Peter Parker had been a clone all along?  From there, it became a complete clusterfuck of muddied storytelling and confusion.  As a reader, the whole ordeal was frustrating since it was a story told over multiple titles by multiple writers and artists, therefore, you'd have a ton of overlap and different "voices" depending on who was the scribe.  Oh, and it cost a ton of money to keep up with it.

You can read all about it HERE.

The result of the whole thing was that Peter Parker (Spider-Man) was replaced by Ben Reilly (Scarlet Spider), and for a short time, this dude was the star of the show.  It was a fairly significant reboot: new guy, new costume, and new villains, however, it was deemed as one of the larger failures by Marvel when everything was all said and done.  People (myself included) just didn't like the guy, and the villains were just cheap knock-offs of other villains (introducing the female Doctor Octopus!)  You could almost compare it to Ashton Kutcher on Two and a Half Men: it was interesting a first, but ultimately, it's just not what it used to be.  This is why it was decided to kill the guy off and be done with it.

Now fast-forward to the here and now.  Marvel is bringing the Scarlet Spider back, but perhaps on better terms.

Chris Yost and Ryan Stegman will be teaming up on the project of the unstable clone (Kaine) in the title role of Scarlet Spider.  Here's a pic showing him in all his badassery (penned by Mark Bagley):

Per an interview with the writer: "This is a guy who used to be semi-crazy, a full-on supervillain, but now he's cured," Yost said. Kaine goes on the road for "a journey of self discovery," now that he's not crazy and covered in scars.

Honestly, my favorite Spidey was always the one that had a hard time putting the leash on his self-control (refer to: black costume), so the idea of an anti-hero version (the same guy that snuffed Doc Ock) sounds pretty damn good to me.  Glad to see they dropped that stupid blue hoodie from the look too.

Dwayne from Cincinnati, Ohio (suburbs) is reading books that rotate to often to keep this updated December 7, 2011 - 2:14pm

Joshua Chaplinsky from New York is reading a lot more during the quarantine December 7, 2011 - 3:03pm

Nice dungaree vest. What is he in, Saxon?

some of my first comics were of scarlet spider... and the trial of peter parker

I stopped getting comics right before the whole clone thing. I'm glad Litreactor is covering the comic book world. You guys should do an article on Ed Brubaker and noir comics in general.