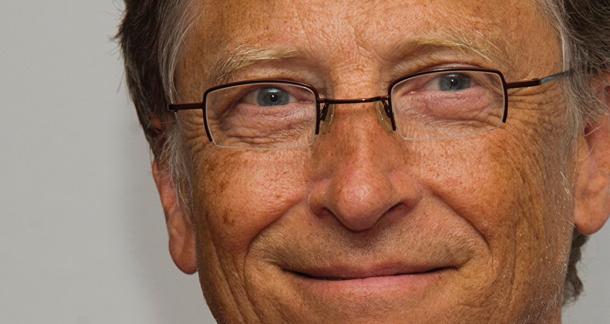 The Gates Bump is a jump in sales an author sees when Bill Gates, former CEO and current philanthropist and drinker of poo water, reads your book, likes it, and blogs about it.

Gates reads about 50 books every year (print books, mind you, not ebooks), and he has always been in the habit of making margin notes and recommending books to friends. Gates started blogging about books sometime in 2010, and the titles are what you'd expect. Technology, sustainability, Malcolm Gladwell. There were occasional oddballs in there such as Catcher in the Rye, but in the last couple years, a large number of popular titles have made their way onto Gates' blog, including Randall Munroe's books and Hyperbole and a Half.

And for 2015, Gates created a video of his favorite reads:

Gates' reviews are short, and he's actually quite an adept book reviewer.

Melinda picked up this novel earlier this year, and she loved it so much that she kept stopping to read passages out loud to me. I started it myself at 11 p.m. one Saturday and stayed up with it until 3 the next morning. Anyone who occasionally gets overly logical will identify with the hero, a genetics professor with Asperger’s Syndrome who goes looking for a wife. (Melinda thought I would appreciate the parts where he’s a little too obsessed with optimizing his schedule. She was right.)

Hyperbole and a Half:

The adventures she recounts are mostly inside her head, where we hear and see the kind of inner thoughts most of us are too timid to let out in public. Despite her book’s title, Brosh’s stories feel incredibly—and sometimes brutally—real...I don’t mean to suggest that giving an outlet to our often-despicable me is a novel form of humor, but she is really good at it. Her timing and tone are consistently spot on. And so is her artwork. I’m amazed at how expressive and effective her intentionally crude drawings are.

It turns out there's a hunger for a celebrity-ish book reviewer. After the departure of Oprah's Book Club, publishers and agents have been looking for someone to fill the void. Gates might just be it, however, it should be noted that this is more pleasure than business for Gates. When Gates was asked to review a specific title, his people said,

We don’t have any say over what Bill chooses...We just leave it on his desk and he reads what he wants to read.

Hey at least it lets people know he's human and has other interests. Even if one disagrees with other aspects, those are some well worded reviews.