How Easy Is It To Climb Aboard The Fifty Shades Gravy Train? 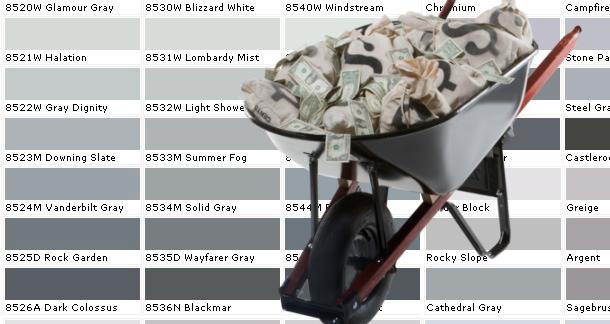 A month or so ago, a journalist friend who has never written a word of fiction confided that he'd read Fifty Shades of Grey and was going to try to write something along those lines because it "seemed like a pretty easy way to make 50 million bucks." I scoffed at him, warned him it was a fluke, explained that the trend would be gone before he had time to pick up a pen. I'm starting to wonder if I was wrong.

Publishers' thirst for the next Fifty Shades-esque success seems unquenchable. A mysterious Twilight fan fiction author who goes by the pen name Sylvain Reynard is the latest to cash in. He (or she?) has just signed a "substantial seven-figure deal" for two books, Gabriel's Inferno and Gabriel's Rapture. Penguin's Berkley imprint plans a first run of half a million trade paperbacks. Originally titled The University Of Edward Masen, the stories were posted on fan fiction sites before being reworked and published by indie romance publisher Omnific Publishing in April 2011. The books have been sitting in Amazon's top 100 ever since.

You can't blame Penguin. Publishers would stop buying trashy, poorly written Twilight fan fiction if consumers stopped buying it, but it doesn't look like that's going to happen any time soon either. The thing that seems to bother writers and bibliophiles most (as evidenced by your comments on Meredith Borders' recent LitReactor column) about Fifty Shades is not the books' success but their utter lack of quality—flat characters, un-sexy sex scenes, insultingly dull plot. Will people buy any book that seems trendy and sexy, regardless of its literary merit?

Two comedians decided to find out, and the results are disappointing but not surprising. The hosts of The NSFW Show crowd-sourced a fake erotica book called The Diamond Club, asking random dolts from the internet to write chapters that "had little cohesion" and "just delivered on bangin!" They gave it a Fifty Shades-style cover, a make-believe author (Patricia Harkins-Bradley), and an intriguing fake description then sent it out into the world. They asked their show's viewers to buy it and leave five-star reviews for the first day or so in order to get it into the top ten on the iTunes book store.

"This is a test," they explain in the video below. "Once we crack into the top ten, is it possible that a terribly written book that makes no sense and just has a lot of banging might just win the hearts of lonely housewives everywhere?" Yes. Yes, it is. As of Thursday morning, the "terribly written book" is still sitting at number four on iTunes bestseller list. What's above it? The Fifty Shades trilogy, of course.


What is this world coming to? I'm seriously asking here. How long is this going to last? Do you think that a book with literary merit will ever make as much money as Fifty Shades?

"Do you think that a book with literary merit will ever make as much money as Fifty Shades?"

Yes and no. As quickly as 50 Shades, probably not, though anything could happen. Over a span of time and to the extent the author could never reap the spoils of their efforts (due to that pesky issue of dying), most likely (though we don't know what it's like being dead, so mabye all that money is still pretty rad even if you're a corpse).

Some authors write for money, some write to create Art.  I'll focus my attention and efforts on the latter.

Jane Wiseman from living outside of Albuquerque/in Minneapolis is reading Look to Windward by Iain M. Banks August 2, 2012 - 7:50am

Ricky Sprague from America is reading The Wonder Woman Chronicles, Volume 2 August 2, 2012 - 8:08am

Cheer up! Maybe people are buying this Diamond Club book because they think it's funny. Or, maybe it's getting a lot of returns. You can't know the motives of every purchaser of every book, including Fifty Shades.

Except it doesn't have any literary merit and the term isn't even a quarter as subjective as you imply.

This is pretty funny. Honestly, it makes me want to write one of these. I'm not in love with money, but I sort of don't have any more, and I do like eating.

My question is, does this only work for Twilight-based fanfic? I am seriously contemplating digging up all those Duran Duran stories (what we called them before they were "fanfic") I wrote when I was 15 and submitting them to poolside book publishers.

Robert.B from Northern Ireland is reading The Last of the Savages By Jay McInerney August 3, 2012 - 11:47am

There seems to be a never ending stream of these type of books cropping up, when I went into Waterstones last weekend there was a lot which seemed to follow almost the exact same plot as Fifty Shades, not to mention they all had a sticker saying 'If you loved Fifty Shades of Grey you'll love this'. I'm not a fan by a long shot but if it works for people, why should they stop writing it. These type of books are selling in their millions whether they have literary merit or not but can a book with Literary Merit do the same? Maybe but the Fifty Shades books have a very enviable demographic.