The Cat in the Hat and the Holster: New Pro-Gun Book For Kids 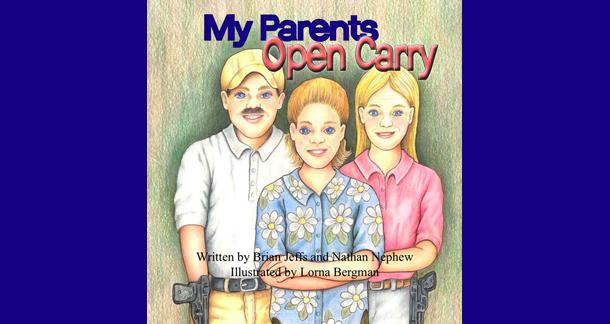 Ever wondered where the books depicting open carry families might be? How come nobody in Green Eggs & Ham sported a perfectly legal holster and tidy pistol? Why The Very Hungry Caterpillar didn't scoot past a family enjoying their Second Amendment rights on his way to bore through an apple?

Wonder no more, My Parents Open Carry is here to save the day!

In the book, 13-year-old Brenna's parents go about their day while also participating in their "natural right" to self-defense by carrying firearms.

[we] looked for pro-gun children’s books and couldn’t find any. Our goal was to provide a wholesome family book that reflects the views of the majority of the American people, i.e., that self-defense is a basic natural right and that firearms provide the most efficient means for that defense.

Inasmuch as there were very few discussions of Constitutional rights in Hop On Pop, they're right about a lack of children's books that make a strong point about open carry laws. Although perhaps Pop could have better protected himself from all the hops if he'd had a filled holster, whimsically drawn by Dr. Seuss himself, of course.

One of the authors said that part of the goal was to put people at ease.

Most kids aren’t scared of a gun...that’s another good point this book tries to make.

Sure, nearly 10,000 American children are injured or killed by guns every year, but it's important that they not be scared.

You can buy this book on Kindle for $4, but I don't recommend it. Not for political reasons, but simply because it's a bad read.

This is the opening paragraph of a children's story:

Although it attempts to fill a niche, it lacks...some of the whimsy you find in most books for children.

Joshua Chaplinsky from New York is reading a lot more during the quarantine August 7, 2014 - 8:23am

The only thing this offends is my artistic sensibility.

You mean the 12 year old with a moustache on the cover?

I can get thirteen year old picture book protagonists. What's more disturbing is the politics, and using the word Strong twice in the same sentence.

Because how many times will we forget, you're "Strong!"

Oh the reviews are a laugh riot too.

Joshua Chaplinsky from New York is reading a lot more during the quarantine August 7, 2014 - 2:43pm

By the way "Open Carry" isn't a verb. And I'll stand my ground and shoot in the face anyone who pretends it is.

Dwayne from Cincinnati, Ohio (suburbs) is reading books that rotate to often to keep this updated August 8, 2014 - 10:40am

I'm pro open carry, but wow this book seems bad.  The art work looks like a family that doesn't trust you trying to be kind in a zombie apocalypse, not normal people carrying guys.

Then in agreement, it seems like it cuts both ways. How are both parties not hating on this?

Dwayne from Cincinnati, Ohio (suburbs) is reading books that rotate to often to keep this updated August 8, 2014 - 3:23pm

I think it is always hard to make fun of someone who agrees with you.

Moderator
Utah from Fort Worth, TX is reading Lonesome Dove by Larry McMurtry August 12, 2014 - 9:11am

I've never found it difficult to make fun of someone who, by agreeing with me, implies that I align myself with stupid people.