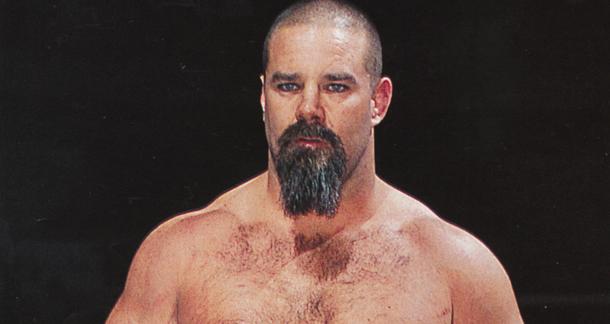 If you don't know who David '"Tank" Abbott is, there is nothing wrong with you. Back when the UFC was trying to be Bloodsport and it was all about style vs style, Abbott was the first (and only) fighter who ever had any success claiming to be from a street fighting background (or "pit fighting" as he called it). Of course, since then it's been established he used to box, wrestle for his college, and has also graduated with a degree in history. Well, here's another chapter of the Tank-Abbott-is-not-such-a-mindless-goon book.

Some of you may know his novel called Bar Brawler was released by Full Circle Press last June. For those interested, here's the synopsis:

Walter Foxx, Happening Beach, California’s most feared bar brawler, works at Sea Lion Beach Liquor at night, attends Wong Beach State College in the day, and dishes out street justice in his spare time to the scumbags, posers, wannabes, and bullies of the world who violate his personal code of honor. Driving a 1987 Chevy Sprint with his faithful pit bull Adolf riding shotgun, Walter and his twisted crew of Poppa Chulo, Rolando, Big Cal, and Gonzo hold court at the Dead Grunion bar where they take on all comers. When Walter sees a man beating his girlfriend one night and steps in to assist her, he gets punched for his trouble and makes the perp pay. The man has friends in high places, though, and Walter soon finds himself facing felony assault charges that his 600 pound bench-press-fueled fighting skills alone can’t beat. As he battles liars on the stand and his own hapless attorney John Wittless in a desperate bid to clear his name and avoid prison, Walter struggles to understand what his life means and what his future holds.

Apparently, Abbott is taking this venture quite seriously, because mixed martial arts website Sherdog reported today that the novel would be the first of a trilogy. The MMA legend has twelve or thirteen spiral notebooks full of Walter Foxx's adventures. The second tome will be called Street Warrior, and should hit the shelves in January, and the trilogy will be concluded with Cage Fighter.

So what do you say about this? Is Abbott serious about this or just strapped for money? Will you give him a try?

This sounds like a roman a clef. He'd have been better off writing an actual memoir about how he got into the early UFC's, behind the scenes stories about the fighters in those early shows, etc.

Grew up watching Tank Abbot. Great fighter, don't know about great writer though. The book sounds like a straight and simple genre grind, which I'm all for. He could prove to be a good potboiler style hack, so yeah, I'd lean toward checking it out before dismissing him as a writer.

L'enfant terrible, certainly. Author, why not? But calling Tank Abbot a "Great fighter," that's where I draw the line Ren.

So - my mind is so full of snarky things to say.