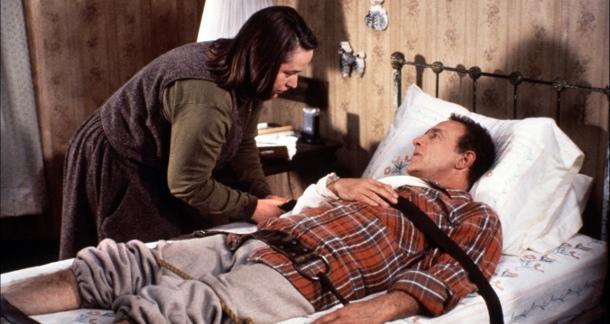 One of Stephen King's most enduringly disturbing characters is popping up in an unexpected place this fall: the Bucks County Playhouse in New Hope, Pennsylvania. Annie Wilkes—the psychotic villainess from Misery—was last seen in 1990, when a chilling performance by Kathy Bates brought the demented nurse to life in the film based on King's 1987 novel. Wilkes will take center stage again starting November 24 in a new theatrical adaptation of the story... because there is no better way to celebrate the holidays than watching a demented super-fan torment the hell out of her favorite author, amputate some limbs, and run over folks with her lawnmower.

The show, presented by Warner Bros. Theater Ventures, Castle Rock Entertainment, and Playhouse Productions, was written by William Goldman, who also wrote the Oscar-winning 1990 film version and The Princess Bride. According to Variety, the play's brief eleven-show run at the regional theater is a "developmental engagement" rather than a pre-Broadway test, and "a future life for the stage title seems certain" if the show is successful in Pennsylvania.

Personally, I would love to see this story on stage. I was lucky enough to catch one of the debut runs of King's Ghost Brothers Of Darkland County earlier this year and am dying to see more live shows based on his work. Would you go see it if it gets a more widespread release? Anybody happen to live in Pennsylvania near this theater?

I love 'Misery' but naturally I'm a little skeptical about it being brought to the stage. Still, I hope it's good.

If only it was a musical.