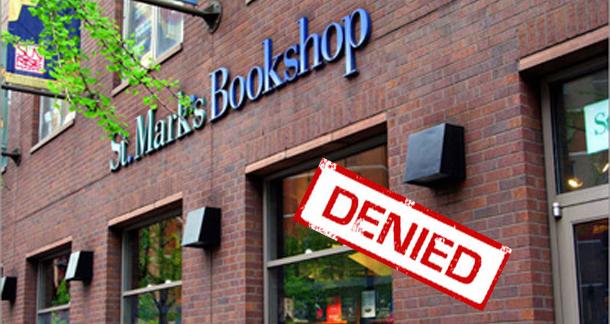 The beleaguered St. Mark's Bookshop in New York City was dealt another blow yesterday: Their request for a rent reduction was denied.

This is in spite of a petition (which we wrote about earlier this month when documentarian Michael Moore threw his weight behind it) that's collected more than 40,000 signatures in support of the store.

Owners Bob Contant and Terry McCoy had previously asked their landlord, Cooper Union, for a $5,000 cut in the rent. But Cooper Union is claiming they're broke and can't afford it. They did offer Contant and McCoy the option of deferring a month's rent, which they can pay back over time.

The good news is that the community has been rallying around the store, so their business has been picking up. Hopefully that continues. It looks like Cooper Union is at least willing to play ball, instead of actively trying to push out the store so it can become a bank or something, so there's that.

Bottom line, they're not making plans to close up shop, but they're not out of the woods yet either.

<rant>This is sad news, not just for indie bookstores, which are struggling as it is, but for New York City. This is an ongoing trend--small businesses being pushed out because of exorbitant rents. Whether that's because of greedy property owners, or just a real estate market that's prohibitive to smaller businesses, it's frustrating. There are, like, 14 Dunkin' Donuts within a few blocks of my job! It's getting hard to find a non-corporate cup of coffee around here.</rant>