Sotheby’s to Auction Faulkner Memorabilia - Including His Nobel Medal 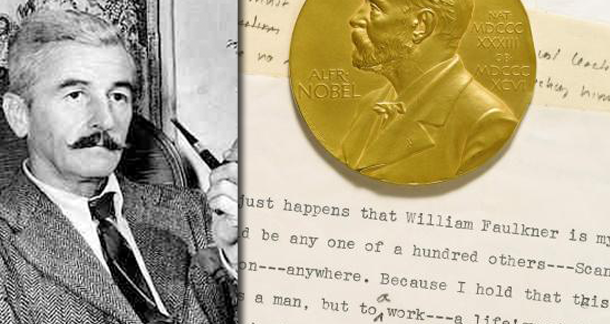 Nobel Prize-winning author William Faulkner’s original writings rarely appear for sale these days, but that’s set to change after original manuscripts, personal letters, his Nobel acceptance speech and medal, and more went on display yesterday ahead of an auction at Sotheby’s, New York, in June.

The items have come from several places: his Nobel medal had been kept at the University of Mississippi, while some of the manuscripts were at the University of Virginia “where Faulkner was writer-in-residence in 1957-58,” and had been on loan from Faulkner’s family. Apparently Sotheby’s started talking to the family about the items after the discovery of an unknown, untitled 12-page short story was found at the family farm in Charlottesville, VA.

"It's a literary treasure trove,” said Justin Caldwell, a specialist in books and manuscripts at Sotheby's. "We were thrilled. Original Faulkner material is very scarce on the market.”

The papers include his hand-written Nobel acceptance speech, manuscripts of "The Trapper Story," "Vision in Spring," "Mammy Callie," and "Hog Pawn,” as well as letters and postcards he wrote to his family while he as living in 1920s Paris. Howry Professor of Faulkner Studies at the University of Mississippi, Jay Watson, hopes the papers will remain in the public domain, particularly the unpublished and newly discovered items.

"I think the jury is out on what it is going to mean to scholars. I think there is less talk among scholars about the Nobel Prize than the manuscripts and the hope of getting access to and being published in some form. That will depend on the actual owner of the manuscripts," Watson said.

The preview Wednesday night precedes a planned Paris exhibition of work he wrote during his years in France. While the Nobel medal is a curiosity, I think the unpublished works could prove far more interesting — don’t you think?