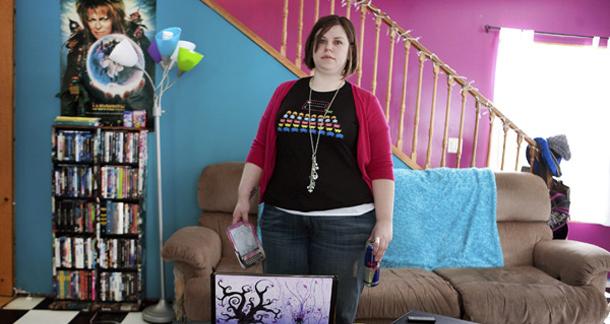 Self-published author Amanda Hocking has joined the ranks of authors who've sold more than a million eBooks through Amazon.

The YA paranormal romance writer, who has more than a dozen eBooks available through the online distributor, joins writers like Stieg Larsson, Charlaine Harris, George R.R. Martin, and Stephenie Meyer. But among those, she's in a very exclusive class: The only other self-published author to cross this mark was John Locke (this one, not this one).

I don't know a thing about Hocking's writing, but according to her Wikipedia page, the New York Times has spoken favorably about her work, calling it "part quirky girl-like-Hocking characters, part breakneck pacing, part Hollywood-style action and part bodice-ripping romance – they are literature as candy, a mash-up of creativity and commerce." So not Tolstoy, but fun.

And her work has won her some serious real-world success. She started publishing books through Amazon's Kindle Direct Publishing in 2010, and by March 2011 nabbed a $2 million, four-book contract with St. Martin's Press--which also bought the rights to her self-published Trylle Trilogy in a separate deal.

Hats off to Hocking. Seriously, she's still in her 20s, and that's fantastic news for her--though I think aspiring writers should take this news with the understanding that Hocking's success doesn't mean self-publishing is a gold mine. There's been a trend lately wherein the self-publishing advocates point to things like this and call traditional publishing dead. But there's a reason events like this warrant news coverage: They're so damn rare.

And what did Hocking do with her success? Leverage it into a traditional publishing deal.

Still, it shows that a writer with the right kind of material, good outreach and a giant pile of luck can sell just as many books as Stephenie Meyer. So, yes, despite my warnings of caution, the playing field is indeed a bit more level.

Is that her press photo? That's hilarious.

I think her house looks awesome.

Joshua Chaplinsky from New York is reading a lot more during the quarantine November 10, 2011 - 11:47am

She better spend some of that two mill on some publicity photos, STAT.

Daniel Donche from Seattle is reading Transubstantiate, by Richard Thomas November 10, 2011 - 11:50am

I seriously laud her for being able to do what she did, though it really is an anomaly. I think it has a lot to do with her audience, the fact that she churns these books out super fast, and that they're readily available on Amazon Kindle for only a buck. Each one is part of a series, so all those things are a part of the recipe there. I am speaking highly of her marketing strategy here, not necessarily her writing. I honestly think anyone can actually replicate her success, you just have to use all the ingredients she did. That's where people are all mistaken. It is rare because not many people use the same business model.

"If you want to be successful, find someone who has achieved the results you want and copy what they do and you'll achieve the same results." - Anthony Robbins

I have that same couch.

I have that same wall.

I have that same haircut.

Though seriously, first hearing about her I was instantly filled with disgust/jealousy.

Shit.  I have her her figure.

This is so cool!  Successes like this are telling us we have options.  If the tried and true route doesn't work, there are other ways.

It isn't always going to work, but a mile of rejection letters are not necessarily the end of the line.

I like her Labyrinth poster. I love that movie.

You can only make it in self-publishing if you write stuff teen girls and bored housewives like.

Joshua Chaplinsky from New York is reading a lot more during the quarantine November 11, 2011 - 11:53am