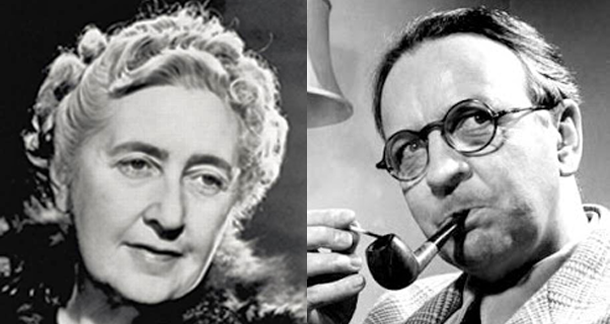 Have you ever thought about the novel you’d consider the ‘greatest crime novel ever written’? I admit I haven’t — I always struggle with these sort of things. It seems impossible to narrow a list down to just ten or one, as is the case in the new poll devised by the Crime Writers’ Association (CWA) to celebrate their 60th birthday: they’ve asked their members to pick the book that is the ‘finest published example of literary sleuthing’ from a shortlist that includes Agatha Christie, Arthur Conan Doyle, Raymond Chandler and Thomas Harris.

The Crime Writers' Association has asked its 600-strong membership to choose the finest published example of literary sleuthing. The members, all authors with at least one novel to their name, will also vote for the best crime writer and crime series.

As you can see, there’s a few missing from the CWA’s list, Agatha Christie and Raymond Chandler are in there twice, and I have to wonder about the inclusion of Reginald Hill and Martin Cruz Smith — frankly, it’s all a bit anglo-centric. Surprisingly, given the recent rise of Scandinavian crime fiction, there’s nothing from that part of the world either. The full shortlist includes:

Where’s Dashiell Hammett? And while Elmore Leonard is on the shortlist for crime writers, he hasn’t made the list of books. Like I said, I usually have a problem with these lists and you probably will too. What do you think is missing? The CWA did this poll 15 years ago and Dorothy Sayers' Nine Tailors (which is very good) won. You can take part in the Independent’s poll here which, while it won’t influence the CWA’s list, might provide a different result.

The results will be announced at the Crime Writers’ Association birthday celebration in London on the 5th of November.

Have to agree on Silence of the Lambs.

He might be one of my favorite authors, but I find Chandler's novels almost too sprawling of narratives to consider them for the greatest crime novels ever. The crimes in them are almost an afterthought, which is the appealing thing about them I think. I hear there are talks of a new Philip Marlowe show, by the way, project headed by the producers of TV's CASTLE.

I'd probably put a Dennis Lehane in there or a Daniel Woodrell, for more current novelists. And Scott Smith's A SIMPLE PLAN would definitely be in my top ten. The crime genre and its sub-genres are so vast that it's difficult to think about.

No And Then There Were None? I'm not even a big Christie fan, I think her prose is pretty bad, but it's a damn good mystery either way.

Cornell Woolrich? Not just because his novels are fantastic, but half the crime of the last fifty years are adaptations of his work. Granted, that's not explicitly literary sleuthing, but still.

I would suggest Leonardo Sciascia. The Day of the Owl and To Each His Own.

Sciascia's a lot about Mafia, especially its cultural roots and motivations. The two works are literary crime fiction with political, social, and psychological tones. All of it in less than 150 pages per book.


If you really want to get all exotic and noirish, you may like Giorgio Scerbanenco, Italian of Ukrainian origin whose stories have inspired a long run of poliziottesco cult movies like Caliber 9 and other Di Leo shoots so dear to Quentin Tarantino.


I hear there are talks of a new Philip Marlowe show, by the way, project headed by the producers of TV's CASTLE.

Sounds like excellent news. I watched The Big Sleep for the first time a week ago and I wonder, will they ever find someone on par with Lauren Bacall and Humphrey Bogart?

I'm a big fan of The Ice Harvest.  Phillips does a great job of letting the characters and the scene he's describing speak for itself by only including the most interesting details.  Aside from how well the book was written, the plot itself--two guys snowed in, unable to ditch town after ripping off their boss (mob boss, nonetheless)--is so claustrophobic.  So much happens so clearly for such a relatively short book.

I also agree with an above comment, And Then There Were None is probably Agatha Christie's best.