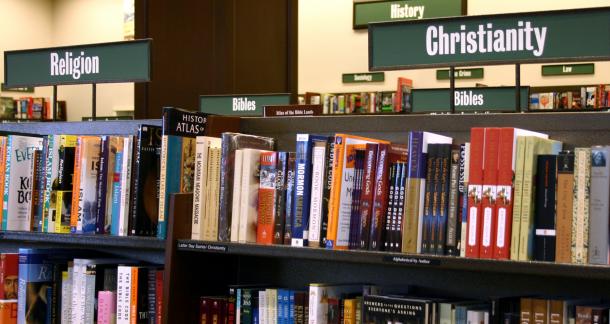 In a story that sounds a little too much like an Onion article, a Utah schoolteacher stole the plot and several passages from a Christian romance book and went ahead and sexed it up.

Rachel Ann Nunes originally published Love To The Highest Bidder in 1998, the story of a west coast/east coast art dealer battle that ends, as these coastal wars often do, in clean romance. After the book went out of print, Nunes got the copyright, made a few revisions, and started selling an eBook version under the title A Bid For Love. It sits on Amazon along with Nunes' 48 other listed works, most of which have covers that depict people holding hands or holding each other's faces, and have titles like A Gift Most Precious and To Love And To Promise.

Nunes was alerted to the fact that a book bearing strong similarities to hers was on the market after Sam Taylor Mullens sent copies of her book, The Auction Deal, to bloggers for review.

Besides the general plot being the same, there are several passages that read very similarly.

From A Bid For Love:

The dark brown curls were everywhere. They were a curse, and had been for twenty-eight of Cassi’s twenty-nine years. They puffed out from her scalp and plunged halfway down her back as if they had lives of their own, helplessly tangled and twisted together. The bathroom lights above the double sink reflected from the brown tresses, bringing out the subtle gold highlights.

From The Auction Deal:

Dark brunette curls were everywhere. They were a curse, and had been for the thirty-one years of my life. They puffed out from my scalp and plunged halfway down my back. They helplessly tangled and twisted together. The bathroom lights above the sink reflected the brown tresses.

Nunes doesn't seem to have a huge problem with the added sexual material. When asked why she thinks the sex was added, she responded merely, "It really is the thing that sells the most."

After some heady back and forth between Nunes and Mullens, a friend of Mullens' sent a message to Nunes. Here's the juicy part:

I was part of the writing group where “The Auction Deal” got started over two years ago. A man in our writing group gave Sam the manuscript claiming the book was out of print and he stated he had collaborated in some way with it many, many years ago. He challenged Sam to ‘work her magic’ and honestly it was quite fun to watch.

At the time, for some strange reason there were no copies we could locate and Sam took this man’s word. In the meantime, we had no idea you renamed, recovered and digitalized your original work. Perhaps this is the reason it was not discovered. Who knows?
The man in our writing group claiming he collaborated originally in the novel died in a tragic car accident last May. Sam and I do not feel comfortable at this time interrogating his family about his collaboration.

The friend also goes on to explain how Nunes was acting inappropriately by contacting reviewers and others who didn't know anything about the situation, and defended Mullens who works at a women's shelter, tutors illiterate young mothers on Native American reservations, and has an autistic son.

THEN, a blogger forwarded the following message, which she received from Mullens:

Please keep this between the two of us:

I can't reveal to extended family members that I write about sex. All hell will break loose in my personal life, something my husband doesn't want to have happen. My husband is extremely supportive of my writing, but it's a secret we keep from our friends and family. I'm a Mormon so what I write would be frowned upon. I will probably be asked to leave the church once the connection is made. My husband is begging me not to reveal my author identity in order to resolve the problem at hand. Never publishing The Auction Deal is not a huge loss. However, losing my amazing husband over this or having conflict in my personal life would be devasting.

Is Mullens her niece? Is she actually a mother and tutor, or is she a complete fraud? Nunes claims that Sam Taylor Mullens is the pen name of schoolteacher Tiffanie Rushton, but hasn't provided any details regarding this discovery.

In addition to a $150,000 lawsuit, which includes lawyers' fees, Nunes started a Go Fund Me campaign for $30k, supposedly to raise funds for legal fees, as she says, "to make sure [Mullens] never does this to me or to anyone else again."

It's some murky water out there. The evidence certainly suggests that Mullens knew what she was doing when she copied A Bid For Love, story about a conveniently deceased mystery man aside. And it brings up an interesting, thorny issue of indie publishing, the fact that works are so easily ripped off and that the authors may be none the wiser.

Does Nunes lose credibility because her work is self-published and in a maligned genre?

The other, big question for readers: do you think that a total of $180,000 is a justifiable number considering that Mullens never actually sold any copies of The Auction Deal? Or does this stink of a money grab?

Yes, it is entirely justified. Writers depend on the integrity of the copyright system. You can't say 'no harm, no foul, because she didn't get away with it and it's only a romance anyway.'

Joshua Chaplinsky from New York is reading a lot more during the quarantine September 11, 2014 - 6:12am

This is quite confusing. I assume time travel was involved.

Weird. A cease and desist order ought to have been enough, given there are no real damages if one e-published version of another's e-book failed to make any splash at all and searches for it actually highlight the original. Sueing for multiples of presumably what either book will ever make seems a uniquely American sport... At least the lawyers are happy. (And that's why we are really here, yes? To keep the lawyers happy.) 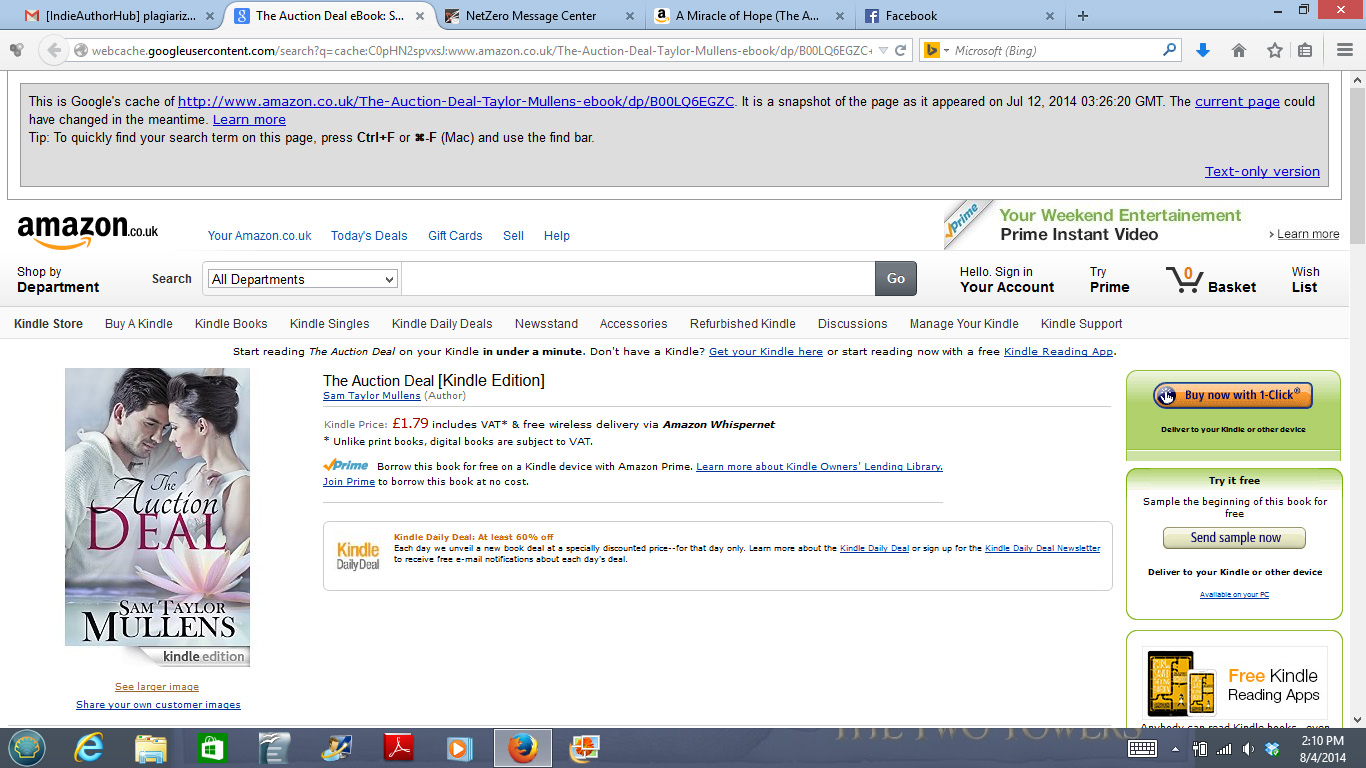 If you go back and look at Rachel's original information, it appears that The Auction Deal did, in fact, make it to market on Amazon's UK site. So Rachel is well within her rights to make sure that Tiffanie never even thinks about "writing" another novel again. It's also come to loght that Rachel isn't the only author that Tiffanie plaigarized. This lawsuit also helps send a clear message to those who are in the business of plaigarism that it won't be tolerated and it will be prosecuted.

Community Manager
helpfulsnowman from Colorado is reading But What If We're Wrong? by Chuck Klosterman September 21, 2014 - 10:22am

Any lawyers in the house? I just wonder how this sort of suit applies across nations.