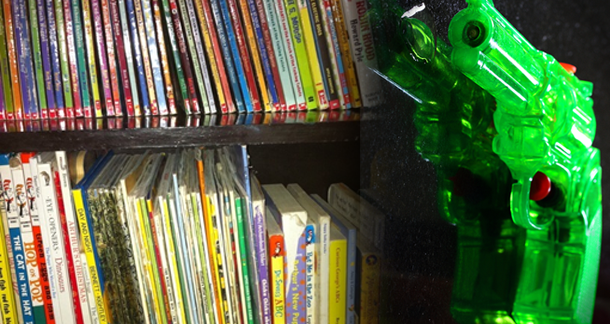 Guns, guns, guns. Everyone seems a bit obsessed with firearms at the moment. Okay, in the aftermath of certain events in the not-so-distant past, it’s probably understandable — and hardly surprising. During Strobridge Elementary “Safety Day”, in Hayward, California, last weekend, one of the events was a toy gun for books exchange — turn in a toy weapon, get a book and a chance to win a bicycle. The trade was the brainchild of the Principal, Charles Hill,  who

…maintains that children who play with toy guns may not take real guns seriously. "Playing with toys guns, saying 'I'm going to shoot you,' desensitizes them, so as they get older, it's easier for them to use a real gun," Hill said.

Apparently Hill got the idea from Horace Gibson, a photographer who takes students' school pictures, after Gibson “expressed concern about the spate of shootings of young people by police in Oakland.” Hill thinks toy guns are far too realistic sometimes, too.

"Some of the guns I've confiscated, if they're stuck down in a waistband, the average person would think it's a real gun," Hill said. "I could easily see one of our sixth-graders wanting to fake out someone at a 7-Eleven by walking in there" with a toy gun. "They would think it's funny, but it could turn into tragedy… If we want older kids to not think guns are cool, we need to start early," he said.

The day also included a demonstration of bicycle and gun safety by a local police officer and a talk by the Alameda County Fire Department about fire safety as well as child photographing and fingerprinting for use in a “missing child case”.

It sounds like a good idea and yes, we probably need to do more to ensure kids don’t think every gun is a toy — too many recent headlines include small children killing friends or family with a gun they didn’t necessarily know was the real thing. Will it make a difference? With a problem that is more obviously a societal issue than an issue of access to guns, anything that improves the way firearms are viewed in our society is a good thing in my opinion.

I wish some of these schools would just give it a bit of a rest. A toy gun does not mean the kid is going to shoot someone with a real gun any more than my reading and writing horror means I have bodies buried in the basement. If they want to give a kid books, that's great, but schools have lost their common sense when it comes to some of this stuff, from kids suspended for lego characters who were armed to kids sent home for playing cops and robbers on the playground, it is getting ridiculous.

While it is true that schools and other institutions can over react and thus become overprotective, the idea here is about changing culture—(toy) guns for books. That is fucking awesome.

Fact is, America has a gun culture, and why not destroy that weed as early as possible? We tried the same thing with cigarette smoking and it worked.

Joshua Chaplinsky from New York is reading a lot more during the quarantine June 11, 2013 - 9:52am

I'll trade you this copy of Lord of the Flies for that neon green water pistol.  'Too tame,' you say?  'Boring,' you say?  Okay, one copy of The Hunger Games.  No kids with guns in that book.  Nothing wrong with a pointy stick.

EDIT: Of course this is a smokeless tabacco fact and yes, the youth still smokes and uses tabacco, but the evidence is overwhelming that we've changed the smoking culture in our country. We could do the very same thing with guns.

Perhaps this is a better example, Josh. It illustrates that smoking has, more or less, been on decline since the 80s and 90s.

EDIT: And to Jyh, I hadn’t noticed your comment before:

Though I understand your point, at the same time I think you are oversimplifying. One needn’t remove guns (or knives or bows and arrows, what have you) from books and/or TV, et cetera, to change gun culture. To do this, we should educate. Same as we educate people about the dangers of smoking or, if you’d like another example, the same way we educate about the dangers of cars—we even make them take classes and tests, and register (imagine that!). Couldn’t we apply this same mentality to guns? Sure there will still be mass killings, but is the answer to do nothing? Murderers will murder, so why bother with laws?

And if I’m remembering correctly, the violence perpetrated in Hunger Games was seen as a bad thing, no? At least from the narrator’s perspective. She didn’t take pleasure in having to survive via killing another human. As far as Lord of the Flies is concerned, I haven’t read that book, so I can’t speak to its point.

If I am oversimplifying, then so is the taking of water pistols.  (In other words, yes, both I and the principal could be accused of oversimplifying.)

There's no way that toy guns are a gateway to real violence.  Anyone saying so lacks critical thinking skills.

I don't think anyone said that Lou.

Ahh, Lou, I see jyh made that leap, having ignored the various nuances of language used.

having ignored the various nuances of language used. --- VonChck

Did I ignore them, or did you before seeing me make the "leap"?  Your post is too "nuanced" for me to be 100% sure of your meaning.

"Some of the guns I've confiscated, if they're stuck down in a waistband, the average person would think it's a real gun," Hill said. … If we want older kids to not think guns are cool, we need to start early," he said. --- From this very article.

"Playing with toys guns, saying 'I'm going to shoot you,' desensitizes them, so as they get older, it's easier for them to use a real gun," Hill said. --- Ibid.

It seemed clear the principal was suggesting that a child's attitude towards toy guns can inform later attitudes towards real guns.  (I wasn't suggesting he was right.)