Rumors Say Kindle Smartphone Could Be Available Early Next Year 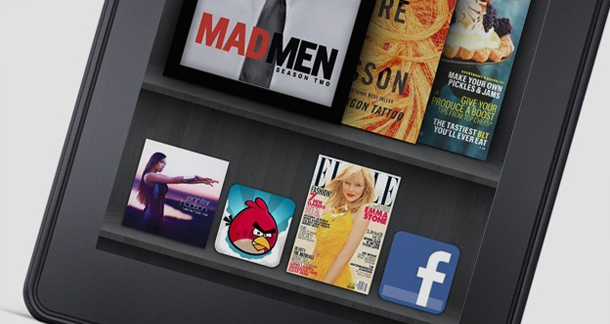 Rumors have abounded that Amazon has plans for a Kindle-based smartphone for a while. Now there may be confirmation of a release early in the first part of 2014, after a leaked report from Taiwan stated that supplier “Primax Electronics is fulfilling orders for next year’s smartphones”. A Kindle smartphone is probably inevitable, and rumors do seem to be consistent about what it will be like.

Previous sources claim that Amazon is working on two smartphones  – one high end model and one regular model. The latest news backs up previous sources about these models: as many as three front facing cameras for motion sensor technology, meaning you won’t have to touch the screen to interact with the device.

I’m sure this will appeal to a lot of people — I mean, who wants to carry around a Kindle and a phone these days? Even CNET is predicting the device is nearing the horizon and, like the Kindle Fire, believe it will be firmly tied into Amazon’s storefront.

The Amazon phone would also likely be a media powerhouse — as long as you're an Amazon Prime customer. The device would have easy access to streaming movies and be able to quickly access your purchased music. Like it or not, the Amazon smartphone will also likely come preloaded with apps and widgets to help direct customers to its various services, which includes Goodreads, Zappos, Audible, and Kindle.

But the most compelling feature (and I have to agree with them) will be the price, as it’s likely to be very attractive, probably in the same range as Google’s Nexus 5, which is selling for $350 unlocked. CNET also makes the point that “With a low price tag, don't expect the hardware to excite anyone. But, you can bet it will be powerful enough and offer a big enough screen to make sure you have a smooth video-viewing experience.”

I don’t know if I’m ready to switch phones yet, but would instant access to your books, movies and music convince you to sign on? I can definitely see the advantages. Roll on 2014!

Hmmm, the only question I have about this is: Why?

What I mean to say is, the iphone3,4,5,whatever, has a really good Kindle app already in place; good enough that I've almost stopped using my real kindle device at home (I have one of those old, non-lit screen bastards) in lieu of my iphone with Kindle app.

I'm just not sure what this device would offer over any other smartphone with a Kindle app.

Edit: I used the phrase "kindle app" a lot in that short comment. So much for word variance.