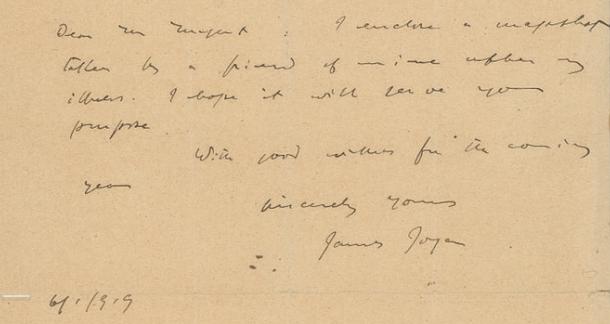 James Joyce lovers in the United States have shown their devotion to their favorite author many a time, but most recently, that adoration came in the form of $24,650.68. Two rare, handwritten letters from Joyce just sold for that sum—10 times the guide price—in a recent auction, reports The Guardian.

The letters discuss Joyce’s troubles in finding a UK printer for Ulysses. The first of these notes, dated 1918, states that “eight installments have now appeared in the Little Review of New York but unfortunately the egoist (London) cannot find any printer to set up these chapters.” The author goes on to mention that the book was “also delayed by my illness this year—a grave malady of the eyes to which I am subject.”

The second letter, dated 1919, includes a photo taken of Joyce post-illness. Ulysses was featured in The Little Review as a serialization between 1918 and 1920, and its editors were charged with obscenity for publishing the episode Nausicaa. The novel was banned in the U.S. until 1933.

Mark Traynor, managing director of the James Joyce Center in Dublin weighed in on the amazing purchase, stating that the letters were “written during a fascinating period in Joyce’s career.”

“He was trying to complete Ulysses in the midst of increasing problems with his eyes and an ongoing struggle to find a publisher (and printer that would agree to print it) for the work,” Traynor added. “These letters are also written during a period when Joyce was still smarting from the publishing difficulties of his earlier works Dubliners and A Portrait of the Artist as a Young Man.”

What would you give to get your hands on a piece of James Joyce’s history?