Publisher of Lawrence Wright Book on Defensive Against Church of Scientology 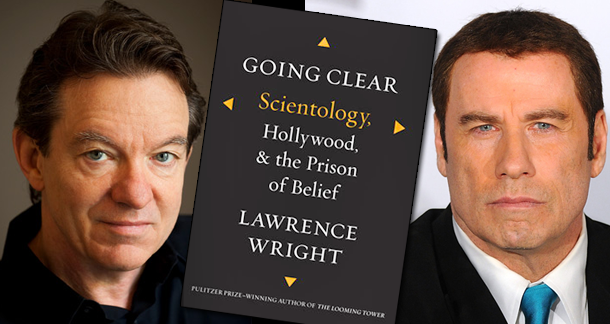 Tom Cruise and John Travolta are just a couple of the high-profile individuals associated with the Church of Scientology, but you knew that, right? Well, a new book by Pulitzer-Prize-winning author Lawrence Wright, called Going Clear: Scientology, Hollywood, and the Prison of Belief, was released yesterday amid attempts by the church to discredit the ‘secrets’ within its pages.

Wright, who won the Pulitzer for The Looming Tower, described as a “now-classic study of al-Qaeda’s 9/11 attack”, is renowned for his meticulous research (mostly done on legal pads and filing cards), a fact corroborated by Jeffrey Goldberg at Atlantic magazine: “There is no more careful reporter in the world than Larry [Wright], and no one who is as thorough and as indefatigable.” Wright's publisher, Knopf, responded forcefully to the church’s claims the book wasn’t fact-checked or vetted.

Wright spent several years researching and writing GOING CLEAR. During that time he conducted over 250 interviews, the majority of them with present and former Scientologists; sourced original material about the Church and its founder; read thousands of documents; and did extensive reporting.

Last week the Church released a statement against the book, calling it “nothing more than a stale rehash of allegations disproven long ago.” Tidbits in the book include allegations casting doubt on founder L. Ron Hubbard’s claims to have been healed of injuries through Dianetics, as well as to his military heroism — foundations of Scientology’s narrative. There are also reports his ‘heir’, David Miscavige, who now runs the Church, beat subordinates and forced church members to sleep in something called ‘the Hole’.

Early reviews for Going Clear… are positive, but Wright’s take on the whole idea that his book is an exposé of Scientology made me laugh:

Why would I bother to do that? Scientology is probably the most stigmatized religion in America already. But I’m fascinated by it and by what drives people to Scientology, especially given its image.

He's preaching to the converted, then. It still sounds interesting — will you be rushing out to get a copy?

The 10 Books That Taught Me Everything I Know About Sex

I've grown up just across town of the main headquarters of the Church. I'm bumfuzzled by their beliefs and what they do, but not moreso than most other religions. I am fascinated by the relationship between celebrities and high profile musicians and the like with Scientology. Will be checking this one out.

I find something disturbing about what i've read to be an elitist, class oriented religion. Its actually kind of like a MMORPG, one where you pay to win. But yea its no stranger than other religions.

It's a good thing that there shouldn't be a problem with publishing this book now. Since the dangerous cult of $cientology has been blown wide open, every time that it gets on the defensive it becomes an image problem for the Hollywood yuppie mafia *ahem* sorry I mean the "church".

Pop-quiz: How do you learn about the benefits of scientology? Ask a brainwashed scientologist who's been isolated from everything that's been in the news in the past 5 years.

(Oh, and other major world religions don't take literally all your money and/or try to physically or psychologically torture you when you try to leave, regardless of how people may feel about their ideologies.)

In case you're in the dark about scientology (and live in the North Pole somewhere with no access to the news), you might want to learn what they're really about: