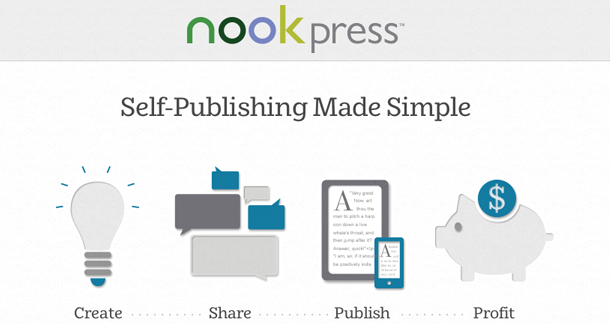 In a move most likely designed to bolster its faltering Nook sales, Barnes & Noble has rebranded the popular self-publishing platform PubIt! as ‘NOOK Press’.  Given PubIt!’s success, with author numbers going up by 20% and title numbers by 24% from the previous quarter, I suppose it’s not a big surprise.

"We have decided to rebrand to NOOK Press because we’ve been very successful with our NOOK brand and that brand has a quality and depth and breadth to it that PubIt! could leverage,” Theresa Horner, vice president of digital content at Nook Media, told Digital Book World. “We also wanted to have the NOOK Press platform as described to be easily understandable as a quick gateway to the Nook ecosystem.”

The good news is they have improved it, with new features (partly provided by FastPencil, a self-publishing services provider). Improvements include:

They’re also improving the royalty situation, with a better rate on low-priced books, namely 40% royalty on all eBooks priced below $2.99, which is better than Amazon’s rate by 5%. The one I don’t understand is the band for eBooks priced between $2.99 and $9.99 — authors only receive 65%, against Amazon’s 70%. I guess they’re trying to encourage lower-prices following current trends for cheap eBooks.

Last night new users were complaining of problems registering with the new system, so it looks like there’s still a few bugs in it. I haven’t used PubIt! — have you? What do you think about the changes? Will it make NOOK more competitive? Unless the popularity of the eReader increases, I’m not inclined to think so.

You can see the new site at www.nookpress.com

Ask The Lit Coach: "What Self-Published Authors Must Do to Win Friends, Influence Readers and Possibly Gain the Attention of a Publisher"

Dwayne from Cincinnati, Ohio (suburbs) is reading books that rotate to often to keep this updated April 10, 2013 - 11:16pm

I've toyed with both of them, but never published. Amazon's seemed really easy, but Pubit! felt like I'd lost a bet.