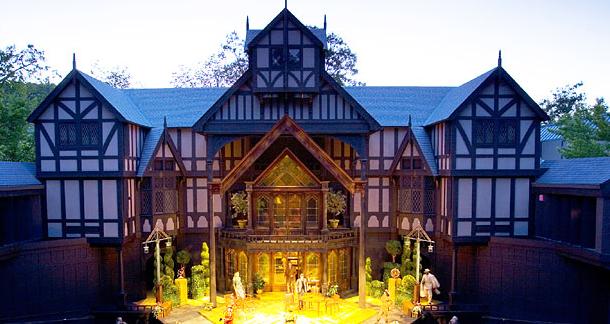 The Oregon Shakespeare Festival has commissioned 36 playwrights to tackle modern English translations of all 39 plays attributed to Shakespeare (one playwright, Douglas Langworthy, will be handling Henry IV.1, Henry IV.2, and Henry V). While there are many modern translations of Shakespeare's work that aim to make Shakespeare easier or more accessible, particularly for students, that isn't quite OSF's goal with the "Play on!" project. The playwrights are free to change as much (or as little) of Shakespeare's language as they like but they are not allowed to adapt the play however they wish:

"everything to do with setting, time period, references etc. will remain unchanged.  As such, pop-culture references and contemporary slang will not be appropriate, and the politics of the original plays will not be cut or “fixed” in any way."

Rather than an adaptation of the plays, like the upcoming Hogarth Shakespeare project which features new versions by novelists like Gillian Flynn and Margaret Atwood, the OSF versions are more like linguistic re-imaginings of Shakespeare's work. While Shakespeare did write in modern English, the goal is to update "this antiquated language to increase understanding, while maintaining the vibrancy of the original." Each playwright will also be working with a dramaturg to ensure that the work makes sense contextually and will be given workshops with a director and actors before their final drafts are due on December 31, 2018. OSF has also committed to hiring a diverse pool of playwrights, with at least 51% being women and at least 51% being people of color.

OSF is currently planning on producing all of Shakespeare's original plays between 2016 and 2026, and while these new versions will not replace any of those productions, many of the new works are likely to be staged, either in Ashland (OSF's home base) or across the country. As one of the largest non-profit professional theatres in the US, the Oregon Shakespeare Festival is a major player in American theatre, producing eleven shows on three stages throughout the year, and attendance for the 2014 season alone neared 400,000 people. Since its creation in 1935, the festival has been committed to community engagement and education and now boasts a fantastic education program for students, teachers, and community members, from seminars and workshops to publications. Other exciting current projects include the Daedalus Project, Every 28 Hours, and the Latina/o Play Project, in addition to developing new plays, like American Revolutions: the United States History Cycle.

I admit, I was apprehensive when I heard OSF was going to create modern "translations" of the Bard's work, but these reimagined works could potentially be a wonderful educational tool and a way to activate Shakespeare's texts, especially if they are used in conjunction with a text or performance of the original.

What do you think? Would you be interested in reading a modern translation of Shakespeare?