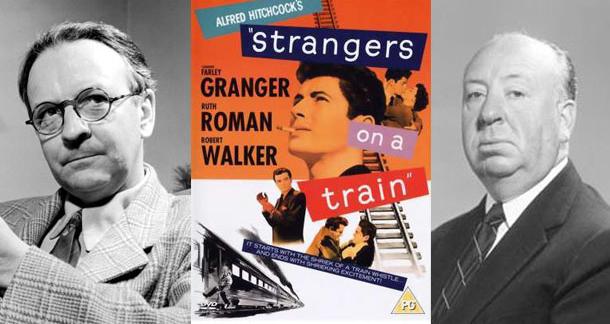 In 1950, Alfred Hitchcock hired Raymond Chandler to write the script for his next project, Strangers on a Train. Sounds like a perfect match, right? I mean, I'd see that movie a million times. Chandler had a good track record prior to that, having been nominated for an Academy Award for co-writing the script to James M. Cain's Double Indemnity.

Except Strangers on a Train never came to fruition--at least, not with Chandler's script. Because the legendary film director and the fabled hard-boiled scribe didn't get along. At all. To the point where Chandler was let go from the project and his draft scrapped.

How bad was the relationship? Chandler complained, often, about Hitchcock's willingness to forgo story and logic for dramatic effect. At one point, as Chandler watched Hitchcock getting out of his car, the writer said, “Look at that fat bastard trying to get out of the limousine.” Loudly enough for the director to hear.

While Chandler's experience on Strangers on a Train was the last of his involvement with Hollywood, it wasn't the last he had to say on the project. In a letter to Hitchcock, Chandler wrote, in part:

I could understand you changing your mind about the things you specifically wanted, because some of such changes might have been imposed on you from without. What I cannot understand is your permitting a script which after all had some life and vitality to be reduced to such a flabby mass of clichés, a group of faceless characters, and the kind of dialogue every screen writer is taught not to write—the kind that says everything twice and leaves nothing to be implied by the actor or the camera.

You can read the entire letter at this link.

This is also a good time to note that, if you have a couple of hours to kill, you could do worse than poking around at Letters of Note. It's a near-constant stream of brilliant.

edsikov from New York by way of Natrona Hts PA is reading absolutely nothing January 10, 2012 - 8:07am

I'm on the fat guy's side. Chandler also hated working with Billy Wilder on Double Indemnity. Take a look at both Strangers on a Train and Double Indemnity and then tell me that the directors didn't know what they were doing.

SGJ from Midland, Texas (but in Boulder, Colorado, now) is reading weird fiction and horror fiction and science fiction and literary fiction and innovative fiction, or maybe a romance or a western or a magazine on bowhunting or show trucks or anthropology January 10, 2012 - 7:46pm

yep, I agree with Edsikov.

It would be fascinating to read Chandler's draft, but since Strangers is (on most days) my favorite Hitch film, I can't complain.