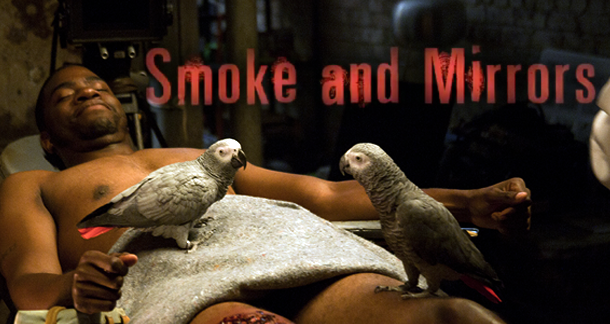 Almost a year ago, we were touting a project on Kickstarter.com to fund a film based on one chapter — yes, just one — of Craig Clevenger’s (still) unfinished novel. Well, the trailer has been released and you can get a first look here:

Clevenger wrote the script and it’s described by the author on his website.

I drafted the script myself, using a core sample bored from somewhere halfway between “once upon a time” and “happily every after.” It’s your basic boy meets girl story only without the romance or the girl. More like your basic unlicensed medic meets escaped psych patient who claims to be an angel in an abandoned subterranean surgical theater following a massive earthquake kind of story.

The author talks about his chapter and the film on his blog.

Not sure I can fully appreciate the symbolism without knowing what kind of birds they are. Or maybe they're just "birds," you know, general birds: the archetypal two-in-the-lap.

Those are grey parrots.

Joshua Chaplinsky from New York is reading a lot more during the quarantine January 31, 2013 - 6:58am

That dude is SO happy to be naked and bleeding with parrots on his legs.

Clevenger is brilliant. Dermaphoria was not only an outstanding book, it highlighted his growth as a writer from The Contortionist's Handbook. I look forward to everything he puts out.

Oh my god... Watched this trailer earlier today and now I just can't get it off my mind... sooooooooooooo fucking cool.