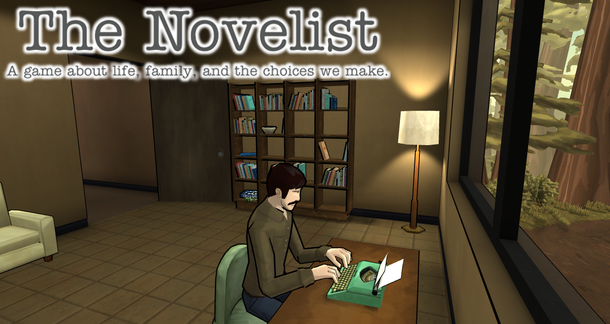 Bored with videogame violence? Looking for a different kind of challenge in your gaming life? Well, The Novelist might be what you’re looking for. Rather than shooting everything that gets in your way, this new game requires you to try to balance the family and work lives of author Dan Kaplan, his wife and son. Novel idea (sorry).

After more than ten years spent developing games like BioShock 2 and Deus Ex: Invisible War, Kent Hudson felt “creatively restless”, left his job and started making a new game with a different goal. What he came up with started paralleling real life, imitating art, imitating reality… As he said in an interview with Kotaku:

The idea is to make us all think about how we approach our own major life decisions. "There’s no winning or losing… You play through and get a story that my hope — and this sounds so pretentious — but my hope is that as you’re presented with the same fundamental question in nine different ways over the course of the game, that you start to learn about your own values. And by the end... maybe your guy has written the greatest book ever but his wife left him and his kid is getting in trouble at school at the time. Well, I guess when push comes to shove you’ve decided that career’s more important than family. Or vice versa."

Right. It’s a third-person game, as you don’t control Dan or his wife or the son, “instead you are a ghost who inhabits his house”. It sounds a bit frustrating as you can’t really do more than observe the characters and influence Dan to do things.

You can watch, observe, and manipulate at your discretion. One day, you might direct Dan to sit and work on his novel, boosting his career at the cost of neglecting his wife and son. Another day you might have him help out his wife at an art show, or take his kid to the beach. Every time you go down one branch, the other two could suffer.

Hudson calls this “player-driven narrative” meaning your choices affect the way the story goes. The sequence of the game is also randomised, so events never occur in the same order.

Would you play this or would the need to kill something drive you away? I might give The Novelist a go just to see what happens, but if my life starts copying the game, I’m quitting.

Is one of the challenges in the game "choose to play videogame meant to teach you about life or go live your life"? Because this is a seriously weird idea for a video game, especially given the creator's input up there.

I would give it a shot. It's basically a story-specific idea along the lines of The Sims.

I never understood video games like Guitar Hero when you could just sit down and play a real guitar. My life is already boring and time-wasting when I choose to do more productive things rather than play pointless games like this anyway.

I would try it based on the premise that you're a ghost. I've been waiting for a good ghost game for a long time.

I hope there's an in-game version of the game that you can make the author character play.

@Nathan: I detect the possibility for a catastrophic infinite loop!

I'd be interested in the game, and I don't think there's necessarily a contradiction here. The notion—I hope—isn't that writers shouldn't have any form of recreation. And of course we're drawn to the stories that reflect our own lives and help give us a sense that these complex problems of ours are understood and can be overcome. I'd be down to give it a try.

There needs to be a sequel where you have to balance video games, college, and family life.

Reminds me of the game Dear Esther.

Ray Richards from Michigan and Iowa is reading The Great Shark Hunt by Hunter S. Thompson August 14, 2013 - 12:25am

I think this game could use a gun. I don't know why they limited themselves. I want a Hunter Thompson version of this game.

You could explore the memories of Hunter, his lawyer, and the random maid that always gets distracted helping Hunter make up the superbowl story.

Hunter Thompson is a charged criminal. A proprietor of drug use. He is a complete mess.

This is one of the most poorly researched bits of text I’ve ever seen. As a storyteller the author should be aware of the vast abundance of videogames that are telling amazing stories without a single trigger being pulled. However, he seems to have been much too lazy to do even the most cursory research, instead opting for ignorant generalities and lazy sensationalism.

I’m posting that last part as a service to others reading the article; a game leaving out the shooting of things is not a “strange twist,” it’s a common element of many, many great games. This next part is just for the author.

I’m not completely sure you weren’t being sarcastic, but that last bit about asking gamers if they could control their violent urges long enough to play through this (admittedly interesting) game is just insulting. People like you are a serious problem with society.