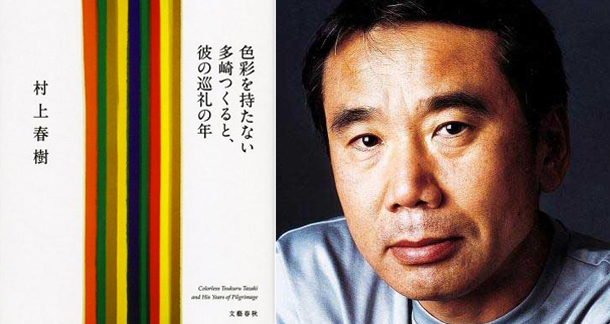 It’s a new Haruki Murakami novel. Yeah, really. It’s called Colorless Tsukuru Tazaki and His Years of Pilgrimage. Apparently a South Korean publisher called Minumsa has won the rights with a bid of at least 150 million Yen (approximately $1.49million), “according to publishing insiders quoted in the Korea Times”.

It’s been a tough battle because in the Korean market, where nothing else sells very well, Murakami flies off the shelves.

"The Times goes on to explain that 'In a country where book readership is hitting new lows amid a bad economy and the explosion of mobile Internet devices, Murakami is one of the few writers capable of moving a large volume of hard copies and paperbacks…'"

"Indeed, Murakami is so popular in Korea, where his previous novel, 1Q84, sold more than 2 million copies that the people in the publishing industry talk about a 'Haruki Syndrome.'"

This is also the highest payment ever paid by Korean publishers to a foreign author. And here’s a brief synopsis if you’re dying to know what it’s about:

Tsukuru Tazaki and Sara Kimoto’s relationship is not progressing easily. Sara thinks the reason behind that is the ill feelings Tsukuru has after severing his relations with his high school friends, so she suggests he goes and talk to them in person to diffuse the situation. Tsukuru visits his friends in Nagoya and Finland one by one, trying to uncover the real reason as to why their relations were broken off. Moreover, he becomes determined to try to develop a new relationship with Sara.

Colorless Tsukuru Tazaki has only been out in Japanese since April and rumour has it his normal translator Philip Gabriel should have it finished “by the end of this year”, meaning it’ll be out sometime in early 2014. So don’t get too excited. Just yet.

1Q84 was not a very good book. 1,000 pages and I'll sadly never get those hours back of my life! Just because an author has the ability to write a long and detailed book of minutia, doesn't mean it's going to translate into a meaningful work of art, let alone a story one can simple enjoy!

Joshua Chaplinsky from New York is reading a lot more during the quarantine June 4, 2013 - 8:04am

1Q84 was my first Murakami and I quite enjoyed it. Didn't find it tedious at all.

@Josh - FYI, I enjoy the podcasts!

More power to you if you didn't find it tedious - I finished it, but mostly out of stubbornness. I read Kafka on the Shore and enjoyed it, so I knew I had the potential to enjoy this author.

But I suppose there is only so much I could take about women's menstruation being explain every dozen pages or the Little People which were never adequately explained in my view, let alone their weird single lines of intrusion into the narrative e.g. and the leader of the beat goes ho ho. (something like that, read it a year ago).