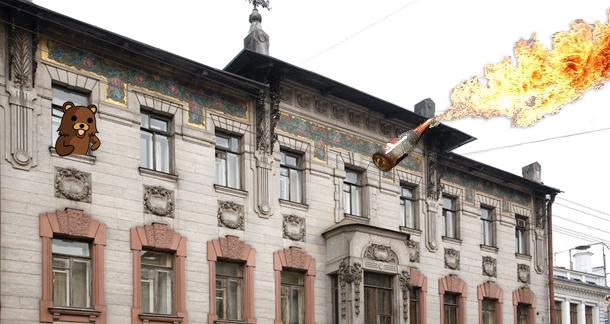 Vladimir Nabokov's childhood house in St. Petersburg-- now a museum dedicated to the author-- suffered a spate of vandalism in the last few weeks. The group responsible calls themselves the "St. Petersburg Cossacks" who, according to Melville House via Russian news organization RIA Novosti, consists of “moralizing ultraconservatives." The group targets anything related to Nabokov because he "promotes pedophilia."

Attacks on the museum began January 10th. Melville House provides a nice breakdown of the incident:

A lone vandal broke a museum window with a bottle on Wednesday night, escaping unhindered. A note stashed in the bottle threatened the museum with ‘God’s wrath.' The contents of the note have not been fully disclosed, but according to the report, asked: 'How can you remain unafraid of God’s wrath promoting Nabokov’s pedophilia?'

On Tuesday, the "St. Petersburg Cossacks" struck again, spray-painting 'pedophile' on the museum walls. Not only this, museum director Tatiana Ponomaryova said she's received threatening phone calls and emails over the last several months calling Nabokov "amoral," and claiming Lolita was the work of a sinner.

The ire toward Nabokov extends beyond his museum. In October last year, a one-man stage adaptation of Lolita set to debut at the St. Petersburg Contemporary Art Museum was rescheduled after the play's organizer received a threatening letter from the group. They specifically attacked Lolita's protagonist, Humbert Humbert, for his lack of remorse, and accused Nabokov of relishing every detail of his "sin." The play eventually went forward in December, resulting in a violent attack on the organizer by three unidentified assailants.

Though Lolita does detail the actions and thoughts of a pedophile, Nabokov was never accused of child abuse himself. Furthermore, while Humbert Humbert wants the reader to sympathize with him, it's clear by the end of the narrative that he's totally depraved. This gives me the impression the "St. Petersburg Cossacks" haven't actually read the book they're condemning, or if they have, they clearly didn't understand its intent.

But maybe I'm wrong. Is Nabokov a pervert and a sinner? Or is this whole affair only fueling the "crazy religious zealot" stereotype we're all too familiar with here in the States?

They specifically attacked Lolita's protagonist, Humbert Humbert, for his lack of remorse ...

Exactly. Lolita promotes pedophilia about as much as a supersized Big Mac meal promotes anorexia.

Joshua Chaplinsky from New York is reading a lot more during the quarantine February 1, 2013 - 12:25pm

Yet another case of the mindless moral majority being majorly hypocritical. Yawn. I'm sure the Russian government and the value they place on artists <cough Pussy Riot, cough> will prosecute these criminals to the full extent of the law.

Cait Spivey from Portland, OR is reading I Don't, a Contrarian History of Marriage by Susan Squire February 1, 2013 - 3:27pm

No one wants to do their research. Remember when Harry Potter promoted devil worship? Yep. Same situation.

Hate to think what theyd do to Polanski. Actually, maybe i wouldnt hate it.