Medieval Book is Actually Six Books In One 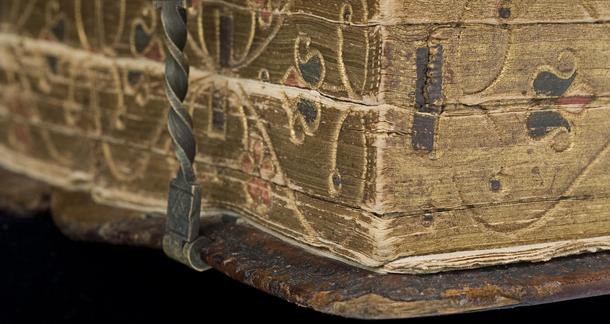 These days, having six books with you at one time is effortless with a Kindle or a smartphone in your pocket, but in medieval Europe, carrying multiple books was a little more challenging. Perhaps that is why dos-à-dos (French for 'back-to-back') binding was invented. Most dos-à-dos books were simply two texts bound together with a common back cover, allowing for easy flipping between the two.

But sometimes two books isn't enough, and maybe three isn't quite enough either, or four, or five. Over at his blog, book historian Erik Kwakkel showcases a stunning volume that is an impressive six separate books bound into an intricate dos-à-dos (or would that be dos-à-dos-à-dos-à-dos-à-dos-à-dos binding?).

The book, a collection of devotionals from the 1500s, is in remarkable shape for its age and its unorthodox structure. For more pictures of this and many other oddities of bookbinding, take a look at Kwakkel's blog.

That is so freaking cool. It is also gorgeous. Look at that detailing on the cover and pages!