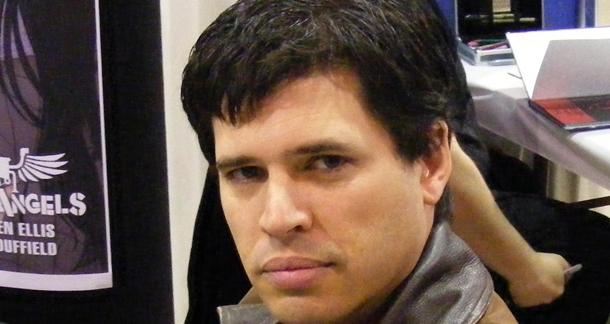 Authors disliking film adaptations of their work is nothing new. Stephen King, Alan Moore, Anthony Burgess, Ken Kesey and a host of other writers have publicly slammed movies supposedly based on their work.

Now we can add Max Brooks, author of the book World War Z: An Oral History of the Zombie War, to that prestigious list. The Huffington Post reports that Brooks gave nothing but low marks for the blockbuster starring Brad Pitt during an interview at Mansfield University in Pennsylvania , stating that the film only shares his book's title, "and that's it."

Adding insult to injury, Brooks claims the producers didn't approach him to look at the script until after filming already began. To which he replied:

"Why would I read this? This is not the movie you're going to make," Brooks said. "You're going to do rewrites and reshoots. That's what happens when you make a giant movie. My attitude is if you haven't invited me in to contribute, then fine. Go make the movie you want to make and I'll see it when it comes out."

As for fans of his novel, Brooks had this warning:

"I cannot guarantee that the movie will be the book that they love. And I'm in no position to tell people to see this movie or not see it. If I'm asked I say: See the movie as a movie and judge it as a movie."

Which is solid advice, all you purists out there. Movies are fundamentally different, and thus they'll never be exactly like the book. Still, Brooks' frustration is understandable, as it's beginning to sound like the movie bears no resemblance whatsoever to its source material. He could always go the Stephen King route and remove his name from the film, as the King of Horror did with The Lawnmower Man.

What does everyone think?

I saw the teaser trailers a while ago and was immediately disappointed. It was painfully obvious that whoever wrote the script hadn't read much of Max Brooks at all.

Joshua Chaplinsky from New York is reading a lot more during the quarantine May 10, 2013 - 8:04am

I think it looks pretty bad, but would Brooks' version really work as a movie?

I wasn't a fan of the book, therefore, I welcome a completely different take in its film adaptation.

Saw the trailer, and as one who has read the book a number of times, it looks like Hollywood has made the obvious changes. But what can you expect? It's a Big Summertime movie based on a Bestselling book, and stars Brad Pitt! OF COURSE there are going to be changes made. But Max Brooks' advice is well taken. See this movie as a movie. I always thought it would be cool if they had just shot it as the book is, a series of interviews. (Would have to probably be shortened a bit). Would've been gritty and sharp. But this is a summer freaking movie, and I won't mind crunching on popcorn and watching Brad Pitt save the world from zombies and swearing to his wife and kids that "he'll be back for them." (Or some such craziness). If I'm disappointed, I'll come home and reread the book for what will probably be the fortieth time.

Maybe I'm ignorant to the way these things work, and it is unfortunate, but the minute you sell your property to someone, it is theirs.  I would say that you can respectfully and quietly remove your name from the project if you so choose, but you can't have hard feelings towards what the new owner has decided to do with it.

Joshua Chaplinsky from New York is reading a lot more during the quarantine May 10, 2013 - 9:24am

To be fair, he's not calling it a piece of shit or anything. Just telling it like it is.

So when's the remake? Hopefully it will be better.

I think a TV (AMC or HBO or the like) series, made in the style of a Ken Burns documentary, would be excellent, and a huge hit. This was a big missed opportunity for all involved to make something truly original.

I'm bound to wonder why he complains about not being shown the script beforehand if he didn't expect them to go by it anyway...

Scott hit it on the head. It should almost play as a ten-part documentary series on HBO with spliced in news footage, interviews, and flashbacks. In other words, treat it like the oral history that's in the title.

Basically the trailers make it look like "2012 starring Brad Pitt as John Cusack".  Also something about a lot of angry people who might be zombies or might just be really excited about the new Justin Beiber album.

When it bombs nobody in Hollywood will be surprised but Brad.

I expected the movie to basically be a series of flashbacks, since in the book you have the UN Inspector (or w/e his job was, I forget) talking to different survivors about their experiences during the war.  I figured it'd go something like this:

*Camera on Pitt* So, Mr. Wainio, you were among the troops assigned to Yonkers

*Camera on Wainio* Yeah, and lemme tell ya, the word 'cluster' doesn't even begin to describe it *Cue flashback with voice-over*

I plan on giving the movie a shot, but the very fact that the zombies were running tells me the writer didn't read World War Z.  This isn't 28 Days Later.  Max Brooks' zombies are the relentless type as opposed to the speed type.  Their slowness is exactly WHY the epidemic wound up so wide-spread.  You could get bitten and still get away.  You turn later, surrounded by other people, who you then infect.  That was the frickin' point!

I hope I'm pleasantly surprised by the movie, but all things considered, I doubt it'll be worth the 20 bucks (with popcorn and drink) it'll cost to go see it.