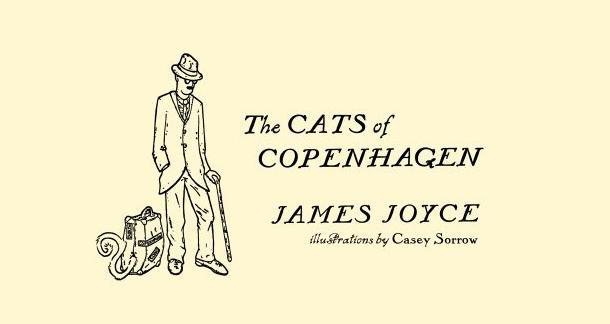 We’ve seen a recent spate of unpublished works from famous authors resurfacing, from Truman Capote’s “Yachts and Things” turning up in the New York Public Library, to the discovery of Jack Kerouac’s long-lost first novel, The Sea is My Brother, finding publication with Penguin last year. Now we can add James Joyce to this prestigious list, with the release of his previously undiscovered children’s story The Cats of Copenhagen.

Though not known for kid’s books, having penned such literary heavy hitters as Ulysses and Finnegan’s Wake, Mr. Joyce is no stranger to the platform. In 1936 he published The Cat and the Devil, an illustrated storybook described by Maria Popova of BrainPickings as “a classic fable narrative mixing Irish wit with French folklore, shaken and stirred with Joyce’s extraordinary storytelling.” The tale originated from a letter Joyce wrote to his grandson Stephen.

The Cats of Copenhagen had an identical genesis, but while The Cat and the Devil eventually found publication in book-form, its predecessor remained a story solely for Stephen. That is, until Ithys Press, a small publisher in Ireland, unearthed the letter and partnered with artists Casey Sorrow and Michael Caine to illustrate and typeset the text. The aforementioned BrainPickings has a nice collection of images from the book here.

Of course, the publication is not without controversy. According to The Guardian, the Zürich James Joyce Foundation, which owns the original letter containing The Cats of Copenhagen, claims Ithys had no right to release the story because, they believe, Joyce’s unpublished works are not in the public domain (his published works went out of copyright at the beginning of this year). The foundation’s Fritz Senn fears the infringement will bring about a lawsuit from the “very belligerent” Joyce estate.

Regardless of the legality or lack thereof, you can get your copy of The Cats of Copenhagen in both print and eBook format (linked below). Anyone excited about this discovery?

Courtney from the Midwest is reading Monkey: A Journey to the West and a thousand college textbooks November 7, 2012 - 8:17pm

I love James Joyce. Regardless of whether it was "proper" to publish this, I think there's a fanbase out there ready to devour anything. I'll probably buy a copy for my child and make it the first book they learn to read, ffs.