‘Lord of the Rings’ Parody — From Sesame Street! 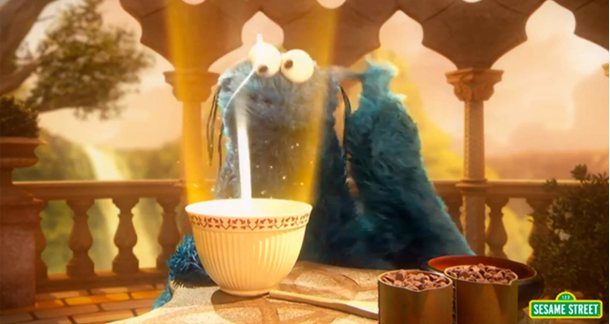 Sesame Street. No doubt the name conjures up memories for most of our generation, having grown up with the show. Who could forget the creatures created by Jim Henson that have had a huge cultural impact and spawned another TV series and a bunch of movies? And it’s still going strong today.

Now, just in time for the release of The Hobbit: The Desolation of Smaug, the kid’s series has released a parody of The Lord of the Rings, entitled The Lord of the Crumbs. Starring Cookie Monster as ‘Gobble’, the episode involves a quest, not to destroy the One Ring, but to remember a cookie recipe.

Legend speaks of a dessert unimaginably sweet and delicious, and when it was destroyed all that remained was the dessert’s powerful recipe. It remained in the hands of a monster named Gobble for a long time, but when it disappeared, all cookies on Monster Earth disappeared along with it. It is up to Cookie Monster to use his memory and remember the recipe in order to bake the cookies in the fires of Mount Crumb.

The parody is rated “DG” — for “delayed gratification” — and contains some laugh-out-loud moments. It also includes cameos from characters from the book, and the cookies are called ‘me precious’, of course.

Intended “to help kids learn self-regulation skills”, it includes counting and other lessons, not to mention, it’s pretty funny, too. I particularly liked the trailer at the end for another one called The Hungry Games (also involving cookies).