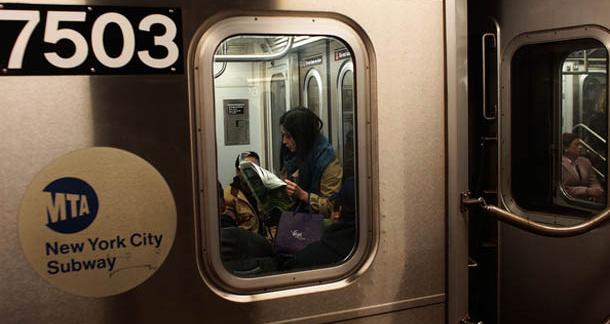 This is a sweet little story: The publication of Trafficked by Kim Purcell was set in motion by a chance encounter on the F train.

In November 2009, Viking children's editor Kendra Levin was riding the subway when she overheard Purcell discussing her book with a friend, and Levin found her curiosity piqued. From Publishers Weekly:

The more she heard, the more she was intrigued, but her next thought, as a wary New Yorker, was, "Should I say something or is that creepy?" Levin put herself in the writer’s shoes and decided it would be a welcome intrusion, but her subway stop was nearing. When the writer and Levin both exited at the Park Slope station, Levin decided it was meant to be. And so, a conversation took place – right there on the platform of the F train.

Levin introduced herself to Purcell, discovered the author had an agent, and, within a week, read and bought the manuscript.

It was a lucky convergence of a number of events--the book was YA, which was Levin's focus, and the subject was human trafficking, which was an issue that interested her, but still, congrats to Ms. Purcell. Here's what the book is about:

Trafficked tells the story of Hannah, a recently orphaned Moldovan teenager’s path from good student with a tight group of friends and a promising future in her homeland, to a slave held under lock and key in a foreign land. When she is brought to Los Angeles as a nanny, Hannah is unaware that she has been sold to – not hired by – a family that takes advantage of her circumstances and threatens and abuses her.

The moral of this story? Discuss your work, everywhere, any chance you get, because you never know when there's an editor listening. Also, take the subway more (it's good for the environment). And don't forget that there are countless paths to getting published, so keep at it.

I'm taking my Netbook and living on the New York subway now though.

BlueOctopuss3 from Puerto Rico (U.S. Territory) / living in MIami, Florida is reading The Shadow of the Wind by Carlos Ruiz Zafon February 19, 2012 - 8:35am