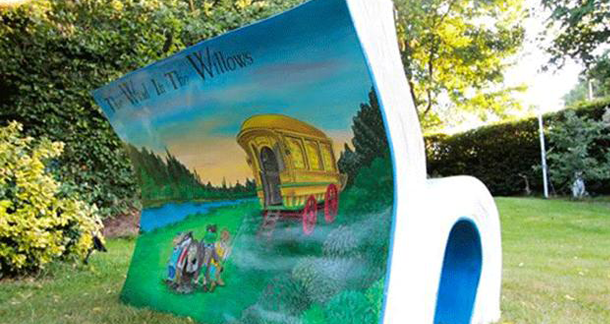 London is one of the most touristed cities in the world — some 3.4 million people visited our fair city in the first three months of 2013. During the spring and summer you can hardly walk down the sidewalk without tripping over a gaggle of tourists. Now, the literary charity National Literary Trust, “an independent charity tackling low literacy levels,” in partnership with Wild in Art (specialists in public art sculpture trails), is planning to add 50-70 “BookBenches” to London's landscape, shaped like and depicting scenes from famous books.

"It is hoped enough business sponsors will sign up to create 50-70 BookBenches, which will appear in London from next July. If all goes to plan Mr Toad's bench will be found not on the banks of the Thames but beside the Bank of England, where Kenneth Grahame was working as secretary when the book was published", a Literacy Trust spokeswoman said.

Initial commissions include J.M. Barries’ Peter Pan and We’re Going on a Bear Hunt by Michael Rosen, as well as The Wind in the Willows. The benches will be auctioned off to benefit the charity. Sponsors so far include the huge tax advisors KPMG and children’s book publisher Walker Books, but it is expected that the number of sponsors will increase.

Michael Rosen said Coram's Fields would be his choice for the Bear Hunt bench. "It's the world's first purpose-built playground still in use, so in a way it's a rare monument to the importance of play."

It’s not like there’s nothing to see in London already, is there? I’m not sure I’ll seek them out, but it’ll be interesting to see where the benches end up. And what books get chosen, too. Will it make people who don’t read go get a book? That’s probably too much to hope for, but it’s hard to fault anything that encourages people to read — or learn to read.

I like this idea. I wish we had it in my hometown.