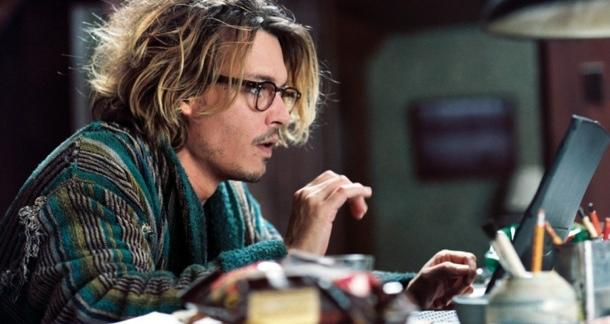 Actor, producer, musician, winemaker, restaurateur—Johnny Depp is a busy man... but apparently not busy enough, because he has just added "publisher" to his lengthy resume. Depp partnered with HarperCollins to create the new book imprint, Infinitum Nihil ("nothing is forever"), which shares its name with his eight-year-old production company.

It's not the most unexpected move for Depp. His brother, Daniel, is a novelist. Gonzo journalist and writer Hunter S. Thompson was among his closest friends (thus his roles in both Fear And Loathing In Las Vegas and The Rum Diaries). And Depp has played, according to the list on the Los Angeles Times, roles in eighteen literary films including Sleepy Hollow, The Ninth Gate (in which he played a rare book dealer), Finding Neverland (in which he played Peter Pan author J.M. Barrie), Before Night Falls (based on the memoir of Cuban poet Reinaldo Arenas), Secret Window (in which he plays a novelist), Charlie And The Chocolate Factory, Alice In Wonderland, The Libertine, and many others.

First up for the imprint is House Of The Earth, a novel finished by late folk icon Woody Guthrie in 1947 but only recently discovered in Guthrie's archives. It will be published in 2013. Infinitum Nihil's second book announced is The Unraveled Tales Of Bob Dylan by Doug Brinkley, but Depp does not intend to focus solely on music-related titles or biographies. The imprint is expected to publish four to six books a year across a variety of genres, including new fiction by young writers. "I pledge," said Depp, "on behalf of Infinitum Nihil, that we will do our best to deliver publications worthy of peoples' time, of peoples' concern."

While there will be eBook versions of Infinitum Nihil's titles, Depp will put extra focus on the design and appearance of the books. A HarperCollins representative noted that the actor "believes that in this digital age, physical books should be enhanced as far as possible so that they stand out as valuable and attractive objects."

Are you a Depp fan? More importantly, are you interested in reading books that he publishes?

I like it for a few reasons, the first being--this is someone who loves books and literature and ALSO had the name recognition and money to take this risk. Secondly, I like the idea of making physical books look and feel special, especially if he goes the route of making these books "special" without making them limiteds. And last, he wants new voices. I can get behind anyone willing to give new writers a shot.

I think I would feel differently if this were a different celebrity, but it doesn't seem to me like Depp is trying to find another way to cash in on his empire, but that he cares about this imprint and what it puts out.

He makes a valid point. I had never thought of that.

I would imagine he has some cool things he wants to do with it. Publishing Woody Guthrie is a huge step for making this a legitimate endeavor.

I want to send him something!

I'd say just waht Sparrow did. It seems cool, and I'm pretty neutral on Depp (which in the celebrity world basically means I like him, since I can't stand the majority). I wish him luck.

Depp has a great point, although I love the smell of a new book, eBooks are taking over. So by making books more "attractive", readers will have more of an incentive to buy. I think this is a great endeavor by Depp, hopefully he sticks with it.

While there will be eBook versions of Infinitum Nihil's titles, Depp will put extra focus on the design and appearance of the books.

This excites me the most, as some of the best books I've read I picked up only because they had an intriguing design. I have a lot of respect for Depp as an actor and artist (Pirates franchise, Alice and Charlie notwithstanding), and I believe he has the heart and style to make a really cool imprint.

I've always reallys liked him, especially in his early career. Gilbert Grape, Edward Scissorhands, Cry Baby, Inspector Abberline (From Hell), and Benny (from Benny & Joon) are some of my all time favorite film characters. I respect him for being able to take on mainstream roles, as well as the quirky roles. And his interests, and mix of different roles, makes me believe that he will have a very intriguing selection of books that have great characters and stories. Can't wait to see some of the new talent he finds out there.