J.K. Rowling Releases ‘A History of the Quidditch World Cup' 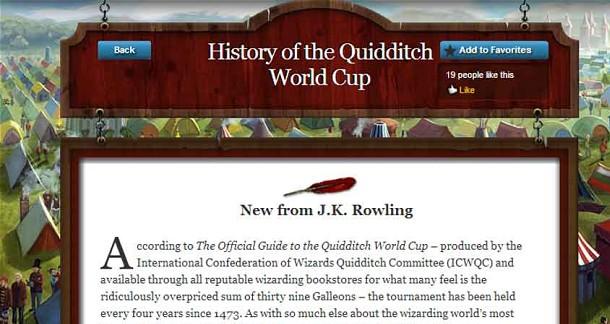 When J.K. Rowling launched Pottermore two years ago, Harry Potter fans were overjoyed with the idea that new material surrounding the author’s beloved series would be released.  On Friday, Rowling thrilled fans by posting her longest and most involved addition to the site yet, the first part of "A History of the Quidditch World Cup."

Providing rich historical background and further explanation of the complex structure of the tournament, first featured in Harry Potter and the Goblet of Fire, the story is sure to delight fans with Rowling’s signature wit and humor.

Rowling’s 2,400-word piece will be followed up by a part two on March 21, 2014. According to The Telegraph, the second story will delve further into the tournament and will include “the witty idiosyncrasies included in the Quidditch World Cup rulebook.”

With a free membership, fans can read the story at Pottermore.com.