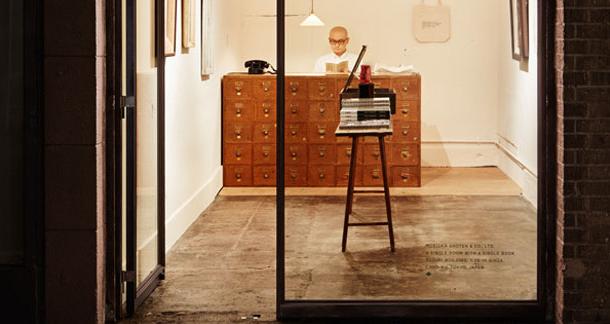 In a bid to shake up the book market, two brick and mortar Japanese bookstores are trying some new, unorthodox sales tactics.

First up, we've got Yoshiyuki Morioka, the man who opened a bookstore that sells one title at a time. Yes, rather than stocking a variety of books, giving a large number of options as is the tradition of bookstores, Morioka stocks a single title at any time. Walk into his store on a given day, you'll find white walls, concrete floor, a single desk, and a small chest of drawers that serve as the sales counter.

The idea is to give readers a depth of experience with a single book, eliminating other distractions.

The store's owner sold off some of his personal collection of wartime propaganda art to fund the venture.

With another tactic in mind, Kinokuniya, Japan's largest chain of bookstores, purchased the vast majority of Haruki Murakami's new title, Novelist as a Vocation. In fact, they bought 90,000 of the total 100,000 printed copies, leaving all other bookstores (and online retailers, wink) with 10,000 copies or 10% to fight over.

As of now, it's unclear whether the move was a good one. Novelist as a Vocation rose on Amazon's bestseller list, then quickly fell off. What's unknown is whether the title fell off because of a supply shortage or because the book is not as popular as expected.

The reality of the industry today is that it is becoming increasingly difficult for brick-and-mortar bookstores to purchase copies of high-profile new books...To rival online book retailers, bookstores across the country now need to join hands in efforts to reinvigorate the conventional book distribution market.

Murakami himself has been quiet on the issue, and if there is a problem with this method in regards to sales, he seems, so far, unconcerned.

It's great to order tea when you really don't like coffee.