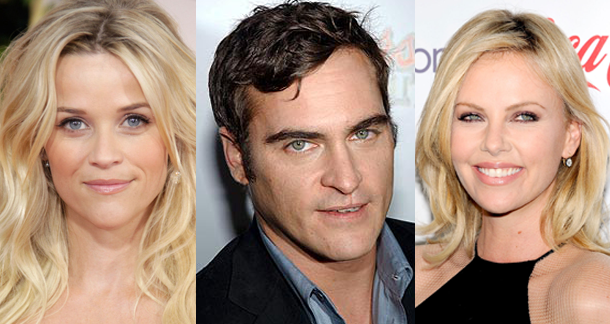 Back in December we reported that Thomas Pynchon’s novel, Inherent Vice, had been chosen as the next project for Paul Thomas Anderson (Magnolia, The Master), and recent reports said Joaquin Phoenix would be taking the lead role.

Now, just weeks after her run-in with the police in Atlanta, it looks like he’s going to be joined by Reese Witherspoon, with whom he appeared in Walk the Line, surprising a few people.

The news that Witherspoon will star in "Inherent Vice," which first broke on Deadline.com, came as a bit of a surprise. Since January, fellow former Oscar winner Charlize Theron has been rumored to play the female lead in Paul Thomas Anderson's new film. As recently as last week, in a report about Owen Wilson joining the film, Theron was still mentioned as a possibility for the role. (To be fair, she could still appear as well; "Inherent Vice" has more than one female character.)

Other cast members include Benicio Del Toro, Martin Short and Hunger Games: Catching Fire star Jena Malone. And as HuffPo says, “Inherent Vice would count as one of Anderson's most star-studded efforts since 1999's Magnolia."

It’s cast is really shaping up, but is that all it takes? Good story, good cast, pretty decent director— I’d like to think it’d be difficult to screw this up, but we’ll have to see.

That "pretty decent director" directed the best film of the past 30 years when he made There Will Be Blood.

I love all of his movies and I'm currently reading Inherent Vice just for this.

Touchy, touchy... Sorry, not a fanboy.

@Dean Fetzer: He's the best director since Kubrick. Nolan is the one with fanboys.