In The New DC Universe, Superman And Wonder Woman Are Hittin' It 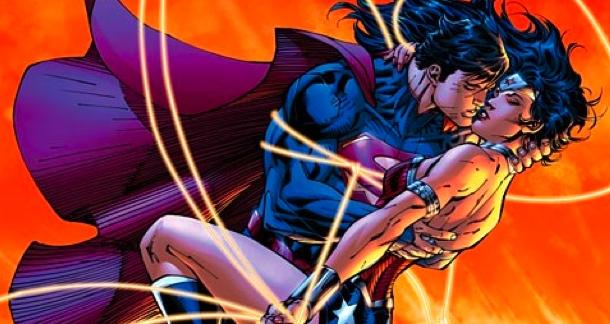 In a huge change to comic book status quo, Lois Lane is out and Wonder Woman is in as Superman's main squeeze.

Last year DC launched The New 52, in which all the current titles were canceled, and 52 titles were relaunched with #1 issues, effectively nullifying years of continuity--like Clark Kent's marriage to Lois Lane.

Now, on one hand, this makes sense. Given Superman's powers, wouldn't sex with a human end in complete and total devastation?

At the same time, this is sure to rile up the purists, who balk at even the most minor changes to long-held traditions.

What do you think? Yay or nay on Superman/Wonder Woman?

This reminded me of Man of Steel, Woman of Kleenex by Larry Niven on the impossibility of a Superman/Lois Lane sexual intercoursing. It makes much more sense this way.

Which, if their target demographic is still teenage boys, is a brilliant strategy... it just won't do anything towards that whole "legitimizing comic books as art" thing.

Joshua Chaplinsky from New York is reading a lot more during the quarantine August 23, 2012 - 8:18am

Reminds me of an (off color) old joke:

"What the hell was that?" she says.

That's when the Invisible Man goes, "I don't know, but my ass sure is sore."

Dwayne from Cincinnati, Ohio (suburbs) is reading books that rotate to often to keep this updated August 23, 2012 - 10:45am

If nothing else it seems it would be a lot more relaxing to date someone you won't accidently kill if you tap on her shoulder too hard. Plus it will be much harder to take her hostage.

As long as they remember to draw Wonder Woman taller than Superman, I don't mind.

As a Wonder Woman fan, I find this irritating, but then again, most of what DC has done with The New 52 rubs me the wrong way. I don't read JLA (which is the storyline where they have become a couple) but I don't want this to reduce her to being "Superman's Girlfriend."

DC Women Kicking Ass pretty much summed it up for me here:
http://dcwomenkickingass.tumblr.com/post/30033372345/sesysidekick

Dwayne from Cincinnati, Ohio (suburbs) is reading books that rotate to often to keep this updated August 24, 2012 - 8:05pm

Wonder Woman has always been 5' 11" actually. Or at least, since Perez.

Dwayne from Cincinnati, Ohio (suburbs) is reading books that rotate to often to keep this updated August 24, 2012 - 8:06pm

Right, my point is that there is no in character reason to draw Superman as not being taller then her.

I'm indifferent to the pairing. Hopefully it will be worth reading.