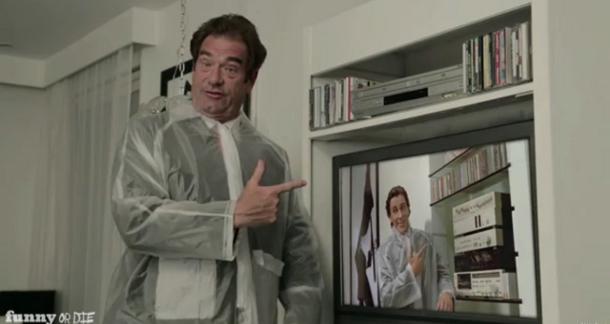 To celebrate the 30th anniversary of Sports, Huey Lewis and the News’ 1983 breakthrough album, the aforementioned Mr. Lewis and ‘Weird’ Al Yankovic re-enacted a scene from American Psycho that featured the band's song “Hip To Be Square." Gawker has the video for your viewing pleasure here. Anyone concerned about spoilers should not watch.

In the recreated scene, Lewis substitutes for Christian Bale’s Patrick Bateman, while Yankovic plays Jared Leto’s part. The video is almost shot for shot exactly like the original, except Lewis, rather than spieling about his own band, extols upon the brilliance of American Psycho. Personally, I thought it was hilarious.

Lewis’ words of praise for the film and his involvement with its parody demonstrates a change in opinion for the musician and actor: according to Gawker’s Neetzan Zimmerman, Lewis originally objected to “Hip To Be Square” appearing in the film, and arranged to recall every copy of the American Psycho soundtrack and have them destroyed.

American Psycho is one of my fave books/movies and this is hilarious! Though it is a toss up between the Huey Lewis discussions and the Phil Collins one...hard to decide which one is better! I mean, I'll never listen to Sussudio the same way again!