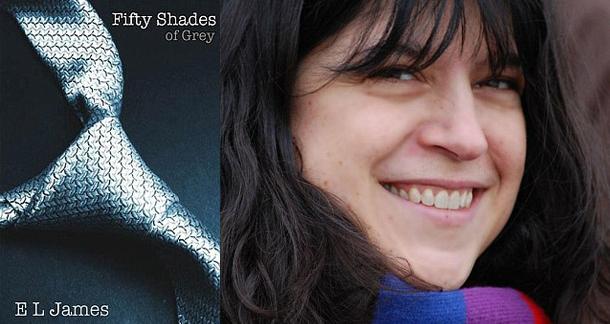 Over the weekend, Fifty Shades of Grey hit the top-selling spots on both Amazon and Barnes & Noble, and became a New York Times bestseller. That's a lot of traction for a book released by a tiny indie publisher in Australia.

It's so hot that Random House has bought the book, and it's two sequels, in a seven-figure deal.

That's not the best part, though. Fifty Shades of Grey, currently the hottest-selling book in the world, started as Twilight fan fiction.

I'll give you a second to let that sink in.

On the off chance you're not familiar with fan-fic, it's when you take other people's characters and write new stories about them. Author E.L. James, a television executive from London, was apparently so inspired by Twilight that she re-appropriated the characters of Edward and Bella for a new story called Master of the Universe.

Then she changed the characters' names and released it as Fifty Shades of Grey.

I guess now I can count today as officially ruined.

Dwayne from Cincinnati, Ohio (suburbs) is reading books that rotate to often to keep this updated March 12, 2012 - 4:28pm

I'm oddly reassured. If this has a market, someone some place wants to read my stuff.

Sheldon Nylander from Venice is reading A Game of Thrones, History of God, The Wind's Twelve Quarters March 12, 2012 - 4:58pm

It doesn't surprise me. I heard a while ago that some of the biggest ebook sales come from romance and erotica because it's easier to hide what you're reading, and can even read it in public without drawing attention. Unless it's a book on tape...on an industrial level stereo...

Funny because one of the hottest things to hit the adult film industry was their parodies of popular sitcoms and films. Why wouldn't this make a good idea? Too many people don't want to learn about new characters. They want the characters they know and love to be in different situations. Gregory Maguire anyone?

SGJ from Midland, Texas (but in Boulder, Colorado, now) is reading weird fiction and horror fiction and science fiction and literary fiction and innovative fiction, or maybe a romance or a western or a magazine on bowhunting or show trucks or anthropology March 12, 2012 - 8:08pm

hunh, neat. maychance I'll buy it, see what the fuss is about.

But it doesn't use the Twilight characters although it started that way.