Herman Cain Spends $36,000 In Campaign Funds To Buy His Own Books 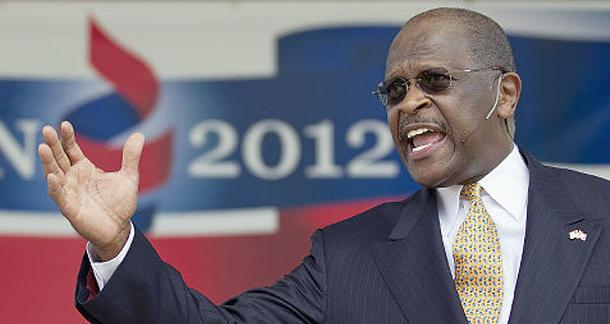 Republican presidential candidate Herman Cain is his own biggest fan. Through Sept. 30, his campaign spent $36,511 to buy copies of books he authored, including his latest, This is Herman Cain! My Journey to the White House.

Cain said he plans to hand out the books to supporters so they can get to know him (and his terrible pizza). It probably didn't hurt that his newest book debuted over the weekend at number four on the New York Times Best Seller List (really, America?).

This is Herman Cain! was published by a division of Simon & Schuster. But the money was paid to T.H.E. New Voice Inc., which is Cain's motivational-speaking company. In fact, his campaign paid the company more than $64,000 for airfare, lodging, and supplies, in addition to the books.

The big question now is: Was this illegal? The Federal Election Commission regulates how campaign money can and can't be spent. Unfortunately, the FEC is made up of political appointees, and despite a bevy of rules designed to keep them impartial, they are still political appointees.

Now, there is some precedent here that would prevent Cain from seeing a financial windfall. The FEC lets campaigns buy candidates' books as long as they don't profit. In 2001, Arlen Specter (Remember him? Neither does anyone else!) was allowed to buy his autobiography to give to donors, as long as he didn't get any royalties or count those books for future payments. A similar issue was raised in 2004 with obstructionist bog monster Joe Lieberman.

The good-government types are asking the FEC to take a deeper look into the Cain's expenditures, which they absolutely should. Even if Cain doesn't see a single cent from the sale of those books, it probably helped him land his spot on the NYT Best Seller List. That's not exactly an incidental perk. And then there's the question of why the purchases needed to be made through a company he owns.

Campaign finance laws are interesting, in the way that dissecting a cadaver on a hot summer day is interesting. You can learn a lot by rooting around in there, but it's not a pleasant experience. The laws tend to be malleable, and while the FEC isn't shy about smacking groups who break the rules, there's also a lot of gray areas which are routinely exploited.

Luckily, Cain is far too insane to actually be elected president.

Dwayne from Cincinnati, Ohio (suburbs) is reading books that rotate to often to keep this updated October 18, 2011 - 5:30pm

This isn't about writing. If the story had been about ethics (as a writer) and if Cain had done something wrong I could see. This is a not even veiled opinion-editorial regarding why the authors thinks Cain shouldn't be president. Every American with normal access to the internet and T.V. has more then enough sources about the canidates this site doesn't need to try to be one.

Ah yes...yet another partisan website...and here I actually thought this site was about writers and writting. What's next LitReactor? I await your next words of wisdom on who I should vote for while being asked to fork over 500 bucks for a class. No thanks, I'll make my own political contributions.

Joshua Chaplinsky from New York is reading a lot more during the quarantine October 18, 2011 - 5:17pm

BOO POLITICS! Who approved this newspost anyway? The only good politics is the politics of dancing.

I don't feel like this article doesn't belong. I mean, it's about a guy who wrote a book, bought a bunch of copies of said book, and is planning on handing them out to people. It's as relevant as some of the other articles, anyway.
But I would like to see more articles that have more to do with writing, or the market, or, you know, more writerly type things.

Dwayne from Cincinnati, Ohio (suburbs) is reading books that rotate to often to keep this updated October 20, 2011 - 8:23am

Yeah but the fact that he is a published and midling sucessful author is the excuse not the reason.

I disagree, dune. Had this been about him buying $36,000 worth of pizza, the story wouldn't have been run. The reason it was run was precisely because it was about books. It's a quirky story that I think has it's place.

If anything the excuse for it being run would be it is about Cain, who has been gaining a lot of politcal steam.

That out there, LitReactor isn't attempting to be partisan or even non-partisan. We have a fairly large staff of people writing for the site, if a small portion of their articles reflect the writer's personal politics, I don't see any issue with that. What I do know is that we certainly didn't bring on anyone because of their politics and it is unlikely we will do so in the future.

If you disagree with the writer, express your opinions and open up a discussion.

I don't have a problem with the basis of the story but I don't see why anyone needs to know what the author of the post thinks about the candidate or any other political figures. It is this kind of biased writing that assumes everyone agrees with the writer or is an idiot for not agreeing. In fact with a news story like this one I'm not even sure why we even have to know who wrote it. Have the writer present the facts, run the story through an editor that makes sure it remains consistent with the publication's/website's editorial standards (yeah, I'm laughing at that last line myself) and let the story stand on its own. And if that is not the way you want to roll then at least stop calling it "News by Rob W. Hart" and call it "Thinly veiled vitriol against politicians I don't like by Rob W. Hart".

Class Director
Rob from New York City is reading at a fast enough pace it would be cumbersome to update this October 20, 2011 - 3:37pm

I was going to stay out of this one, but now that I've been called out by name, I figure, why not right?

The reason I chose to write about this, and the reason it was relevant to the site, is because it's about books. Which kinda makes it about writing, because Cain had to write the books before this became an issue. Books and ebooks and ereaders and authors and bookstores are all fair game for a blog on a site like this. I'm open to being proven wrong.

And Tim, on one hand, I don't think my vitriol was thinly veiled at all. I called him too insane to be elected president with a link to him singing a song about pizza. He sings songs about pizza and wants the highest elected office in the most powerful country in the world! That joke wrote itself.

But, I think, looking at the content of the article, besides a few personal shots (at a Republican, a Democrat, and a Republican turned Democrat), a good chunk of the article was a criticism of campaign finance laws (with the additional angle of manipulating book sale rankings).

You can be a Democrat, Republican or Martian, and still agree that this scenario appears problematic.

Was that too political? I don't know. Maybe I should have talked less about campaign finance laws. Today I've got an article going up about Kobo releasing a new ereader to compete with the Kindle Fire. Maybe I shouldn't have pointed out that it's underpowered in comparison, lest I be accused of techno-partisanship.

Regardless, I'm happy for the input and to see how people reacted, so thanks. But to assume we're going to start telling you who to vote for, based on a joke about pizza, is a little much.

That joke may have written itself for you but you saw the linked video and if you are expecting people to click a link to get a joke I think you may be asking a little too much of your audience.

And just for the record I agree that the story has merit and makes sense being on a site dealing with writing and publishing. I saw and agree with your point in discussing campaign finance laws. In fact I would have liked to see more information on how many other presidential candidates do things similarly. Obama wrote a couple of books I know. I think Perry might have written one. And I think that mormon guy who's name I can't remember did too. So it would have been interesting to find out if what Cain did is a common practice and to get some insight into how publishing and presidential campaigns and elections co-mingle.

But I guess my biggest issue with the article was the snarky, humorous, gonzo attitude. I know you kids today like your snark and I'm probably at least 20 years outside your target demographic but if I want snark I'll read Salon (are they even still around?). If I want humorous news stories I'll read the Onion. And if I want to read gonzo journalism I'll have my doctor put me down.

Joshua Chaplinsky from New York is reading a lot more during the quarantine October 20, 2011 - 8:32pm

I said it before and I'll say it again- I'm liking this Tim fella.

Class Director
Rob from New York City is reading at a fast enough pace it would be cumbersome to update this October 20, 2011 - 8:48pm

Tim - fair points. I wouldn't go so far as to call it gonzo - that's a little more about the reporter inserting him/herself into the story and flouting the established practices of journalism. I was just being snarky.

And the Mormon fella is Mitt Romeny. He wrote a book too. I kept my examples to Lieberman and Specter because they had been in similar situations re: campaign funds buying books.

Obama did write two books. I read the second. He claims to have not used a ghostwriter, and if that's true, good on him, because it's pretty well-written. I read Sarah Palin's first book, too. That was good fun. I've been meaning to pick up the second.

Seriously though, they've all written books. I think the best way to get a publishing deal right now is to run for president...